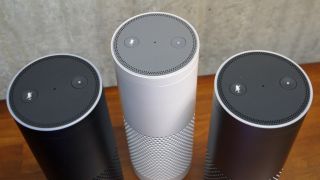 Your Amazon Echo speakers just got a little more useful thanks to the new Alexa Announcements feature.

Similar to Google Home’s Broadcast feature which launched back in November, Alexa Announcements will allow you to create what is effectively an intercom system in your home if you have more than one Echo speaker.

So, if you said to your Echo speaker “Alexa, tell everyone dinner is ready”, your voice saying “dinner is ready” would be broadcast through every other speaker in your home.

You can also say “Alexa announce” or “Alexa broadcast” followed by what you want to say for a bit of command variety. If you only have one Echo speaker, you can also use the Alexa app on an Android smartphone to make announcements, provided it’s tied to the same account as your speaker.

If you’re the kind of household that texts one another from other rooms, this is a good way to bring a bit of noise back into your home. Unfortunately, it also means you can’t pretend you didn’t hear someone asking for a drink from the kitchen while you’re in there getting yourself a snack. That downside is probably cancelled out by the potential for a 'voice of God' prank when you've got new people in your home, though.

Alexa Announcements rolls out in the US and Canada today and although there’s no word on when it will be introduced to other territories, it would be surprising if it didn’t eventually.