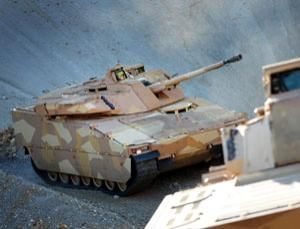 One day, this tank could pretend that it's a cow. We haven't been drinking!

BAE systems is at it again: last week it was inventing the amazing Pirate Blinder, and this week it's invented the invisible tank. It's not really invisible, of course, but it gets pretty close: two video cameras check out the tank's surroundings, which are then passed to displays built into the tank's armour.

Researchers are also investigating ways to make tanks sweat. It's not as bizarre as it sounds: tanks emit lots of heat, which makes them awfully tempting targets for heat-seeking missiles. By capturing exhaust water and channelling it through armoured tiles, the tank could cool itself much like we do - and it could also pretend to be a cow.

We're not joking. Speaking to New Scientist, Hisham Awad explained that individual tiles could be switched on and off to depict simple shapes: "You can make it look like a Ford Focus, or you can have the shape of a cow."

It's been a bad week for Segway users. First, a man was fined for riding one on the pavement in Barnsley; then, New Zealand police discovered that using their ones in public was illegal.

The problem is that while you and I might see Segways as overpriced idiot carriages or scooters for smart-arses, the law sees them as cars - which means driving them on the pavement is a major no-no.

Letting children spend all day on the Daily Mail website rots their brains, the Daily Mail reports: according to child development expert Sue Palmer, "by encouraging [children] to live a virtual screen-based existence we are deadening their developmental drive and dumbing them down".

The Mail quotes a study that found 23 per cent of two-to-five-year-olds can make a call on mobile phones, one-quarter can navigate around websites and 17 per cent can post racist comments underneath Mail Online articles. We made that last one up.

The study also found that 11 per cent of tots can't tie their own shoelaces, but we don't see the problem here: surely they can just Google for instructions?

Another week, another instalment of Here Comes Skynet: now the robots are building things without human intervention. Daniel Mellinger and his team from the University of Pennsylvania have come up with a system where flying robots can build pretty much anything: simply come up with a design, leave the parts lying around and the robot helicopters will pick them up and stick them where they're supposed to go.

BITTY BUILDERS: These robo-copters can't really be builders: look! They turned up!

Are you scared yet? No? Then just read what Mashable had to say about the robo-copters: " Imagine if these mini copters were scaled up to 100 times their size, putting together skyscrapers, bridges, or the components of Skynet." Yeah! Imagine if they had claws, or guns, or A BIG SCARY FACE!

Microsoft wants to help you when you're dead. Interaction designer Richard Banks is working on devices that can act as digital memorials, high-tech alternatives to shoeboxes full of faded photographs. The trick is to work out what's worth keeping - and what the grandchildren shouldn't get to see.

DIGITAL MEMORIES: Microsoft's Timecard is a kind of digital memorial, showing someone's photos in a timeline

As the BBC puts it, "In future, it may be that as we write our wills and maybe even burn our secret letters, we may have to also spend time cleaning out our online lives, ready to be put on show to those closest to us."