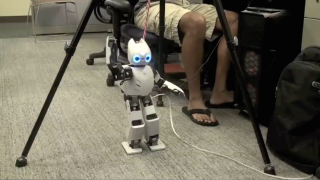 Researchers at the University of California, Berkeley have programmed a humanoid robot to learn how to move and stand just like an human child would learn.

The team, led by post-doctorate Igor Mordatch, created a neural network for the AI robot, called Darwin, that allows it to learn basic movements like a child does when seeing adults walking, sitting standing, etc.

"The neural networks act as a map, a way to make decisions," Mordatch told Quartz.

"The robot only knows where it is, where it wants to be, and the neural networks output the actions it should take to keep achieving the action it wants to do."

Darwin has so far learned how to stand, stay standing and make other simple movements.

It learns as it goes in a more organic manner, without fearing to make mistakes, while also learning from any mistakes it does make.

Darwin also sports sensors that transmit data on the position of its limbs, as well as the pressure on its feet and even the load on its joints so that it can learn how it should be moving with that information to sit or stand or perform some other movement.

Mordatch and his team hope Darwin will eventually be able to walk around the Berkeley campus and learn the world for itself by next year, along with the ability to pick things up.

But in years to come, the team believes robots such as Darwin could eventually be used to go to places that we, more fragile humans, can't go due to toxic or hazardous situations.

In the meantime, you can check out Darwin and his first steps in the video below.