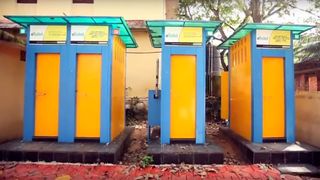 The western world may be built on oil, but without water we'd all be dead within a week – it's our most vital resource.

One in nine people globally still don't have running water, and with efforts to counteract global warming at times piecemeal and always contentious, managing the world's water supply is likely to become more of an issue for all of us.

The good news is that technology is being developed that will soon enable us to dramatically, exponentially, increase our water efficiency – but you might not like the sound of it. We're talking about toilets that recycle water from human waste. That's right: poop.

The Bill & Melinda Gates Foundation is one of the biggest supporters of this tech. Two competitions to 'Reinvent the Toilet' sponsored by the foundation have already been held, in 2012 and 2014, resulting in 24 prototype designs for the toilet of the future.

"With one billion people still defecating openly, and current sewage systems being so energy- and water-inefficient, the toilet needs to be reinvented, right from the beginning," a spokesperson for the Foundation told TechRadar.

"Our vision is that we will be able to bring these toilets to the global markets in the future. The criteria for the toilets is that they use very small amounts of energy and that they do not create waste."

The foundation supports a number of different projects across the globe based on the 24 designs that came out of the Reinvent the Toilet fairs. Just as they sound, these were expos where exhibitors had booths showing off their prototypes.

"We hope to test these toilets on a small scale before producing them on a much larger scale," explains the spokesperson, who went on to tell us more about some of the prototype designs that are already out for real-world testing.

The holy grail of these next-gen toilets is to turn effluent into drinking water, but the step before this is getting waste water into a state where it can be used in situations where its quality is less critical.

A toilet developed by RTI International, is an independent nonprofit research institute, in collaboration with Duke University and Colorado State University is one of the lead projects of this reclamation revolution, and has been in real-world testing since September last year, with a unit installed at CEPT University, India.

It's not designed to replace existing sanitation systems, and doesn't even have to be plumbed in. It's ingenious, using solid waste to power the filtration of waste liquids into water that can be used for future flushes.

First, it splits waste into solids and water. The liquids go through a multi-stage filtration process, which is powered using energy harvested from burning solid fecal matter after it's been dried and compressed into pellets. You might imagine a smell worse than that of a festival toilet resulting from burning human waste, but RTI International claims the pellets don't smell.

It's a poo-powered toilet, and the water that's produced by the filtration process is classified as 'grey': not good enough to drink, but clean enough for washing your hands or for watering plants.

Start thinking about what that water was the day before, though, and you get to the real issue of toilets like this: social acceptance. While the foundation thinks the time will come when we can all skip out and buy one of these water-reclaiming toilets for our homes, it's going to be a while before people want to do so.

"We expect that it will take a long time before these kinds of technologies are adopted across the world. However, we are optimistic," the Bill & Melinda Gates Foundation spokesperson told us.

"Water scarcity will worsen due to growing population and climate change, and we will need to act with urgency. This will put pressure on developed countries to seek out more sustainable sanitation solutions – something that our reinvented toilets can help to achieve."

One advantage of standalone units that don't need to be plumbed in, like RTI International's design, is that they also don't need to be adopted on a country-wide scale to succeed. They can operate outside of existing infrastructure.

At present, this is the most feasible use for this sort of setup. Earlier this year, Pulluvila, a village in India's Kerala state, became one of the first places to use one of these 'eToilets', as they're commonly called.

As part of a year-long trial, Eram Scientific eToilets have been installed in the small village as public conveniences.

The most interesting part of the Eram Scientific eToilet is its heart, the NEWGenerator. It's designed by the University of South Florida, and both the university team and Eram Scientific have received grants from the Bill & Melinda Gates Foundation.

The NEWgenerator is similar in concept to the RTI International toilet, but the execution is different. Rather than burning waste solids, the system is powered by solar panels on the roof of the toilet block.

These panels charge a battery, which in turn powers a pump that pulls the water from the sewage sludge, which is kept in an underground tank. The solid waste is stabilised and treated, ready to be used as plant fertiliser, while the liquids are passed through an anaerobic membrane bioreactor, which filters out solids and bacteria to produce clean(ish) water. This is then chlorinated, ready for flush use.

No by-product is wasted unnecessarily, either, as the NEWGenerator also collects biogas given off by the sludge, to be used as fuel. Compared to the RTI solution the NEWGenerator is more of a producer of fuel, rather than being designed simply to reduce the running cost of a toilet.

While the University of South Florida team has hinted at its intention to work on a NEWGenerator that can produce drinking water, the processes involved will need a lot more energy. These standalone toilet designs rely on membrane filtration, which allows for a very energy-efficient processing.

To realise the poo-to-potable dream, we need to scale things up a little. The Janicki Bioenergy Omni Processor is the answer. It offers an interesting, and convincing, take on the future of waste treatment, and looks like a mini power plant rather than a toilet block.

Like an industrial-size version of the RTI International design, the Omni Processor S200 uses the solids from fecal sludge as a fuel source to run this power plant. Rather than using membrane filtration, water is effectively distilled. The liquid is evaporated from the sludge as part of the process of turning the fecal matter into dry fuel, and this is what becomes drinking water.

The Omni Processor can also be used to convert grey or black (sewage) water into drinking water, although as these liquids wouldn't produce enough solid fuel to power the process, additional power would be needed – this could be animal or household waste, and possibly even plastics.

It's a novel process, but one with some traditional elements: the Omni Processor plant uses a piston steam engine that, depending on the ratio of solid fuel to water, can be used to generate significant amounts of electricity as well as drinking water.

Janicki Bioenergy's big public unveil came in early 2015, at an event during which Bill Gates drank a glass of the water produced by the Omni Processor S100. That original model is just a tech demo compared to the S200 currently being prepped for commercial use, though.

The S200 takes up 230 square metres, so it isn't something any of us are going to be able to fit into our basements, but its capabilities are impressive. It can process 92 cubic metres of sludge a day, outputting up to 86,000 litres of drinking water.

To use Janicki's own rough calculations, the S200 will process the waste of 100,000-200,000 people, and provide water for 35,000, as well as 10W of power for 25,000 households (granted, that's only enough to charge an iPad). The byproduct of the process is one cubic metre of ash, which could potentially be recycled as building materials.

While none of us are personally going to own an Omni Processor, given the size and scale of the system, Janicki Bioenergy has an eye on 'homebrew' energy conservation too.

"A household model has not been built yet, however, our engineers are working on developing a similar product: a self-sustaining household toilet that combusts waste as the fuel source," the company says on its website.

Perhaps in the future we'll be saving up for a combustion toilet rather than energy-saving wall insulation as we seek to protect our precious water supply. However, even if the idea of poop processing in your own home doesn'tgross you out, we'll have a while to wait before we're able to buy one of these intriguing machines off the shelf.

"People will be able to buy these toilets, and not only will they provide an excellent sanitation solution, they'll also be sustainable," the Bill & Melinda Gates Foundation spokesperson told us. "It may take a generation to get to this point, but we're optimistic."

Processing poop is never going to be glamorous, but it's set to become a key technology in the bid to improve sanitation in developing communities – and in the future it could become equally important for developed nations, as they seek to maintain critical access to clean water.