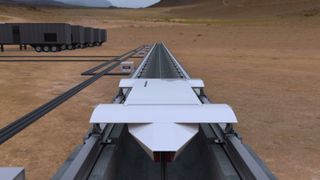 Hyperloop Technologies has announced that it will begin testing technology based around Elon Musk's proposed Hyperloop transport system on an open-air track in Nevada next month.

Construction materials for the project, which the company is calling Propulsion Open Air Test, will begin arriving before the end of the year. A one-kilometre track and test vehicle will then be used to trial the company's linear electric motor as it aims to hit 540 km/h in two seconds.

Hyperloop Technologies is not alone. The Hyperloop, described by some as "a vomit comet that will cause terrorism and deafness," is currently being developed by a number of other companies, as well.

These include the confusingly-named Hyperloop Transportation Technologies – a startup formed in 2013 that's developing a five-mile test track in Quay Valley, California – and Musk's own SpaceX, which is currently building a one-mile test track near its Hawthorne, California headquarters.

A glimpse of the proposed Propulsion Open Air Test can be viewed in the video below: