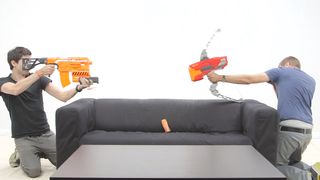 We're peaceful folk at TechRadar, but this week's show got a bit confrontational. Maybe it was how Hugh was sitting or the way Marc dressed himself that morning. Something was getting us irate, and the guns were out.

But with Gamescom now wrapping up, there was also plenty to chat about. So we highlighted our favourite moments of the show and discussed the biggest announcements from Germany's own E3.

It feels like a week can't go by without wearables hitting the headlines, and sure enough it was the iWatch back in the spotlight. But Samsung also earned some of our attention this week, between the launch of the Galaxy Alpha and rumours of a Gear Solo smartwatch.

Then we shot each other a bit more.