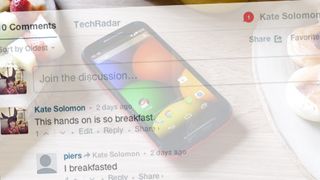 Covering all the major tech issues

What's that you can hear over the tap-tap-tapping of keyboard keys and the muffled beat of next door's dubstep? It's the sound of change.

We're making some really big changes here at TechRadar and one of the ones we're most excited about is our new commenting system.

Yes! You can now post comments through Disqus, either by signing in using your Facebook, Twitter, Google+ or email accounts, or as a guest. It means it's much easier for you to get involved in the conversation with each other and with us TechRadar writers by upvoting good comments and replying directly to other users.

So what are you waiting for? Let us know what you think about the Moto E, whether you like the look of the HTC One Mini 2, whether you're Team Philips or Team Nintendo, or just how you're feeling in the comments below.

And stay tuned for more exciting TechRadar news in the coming weeks and months!