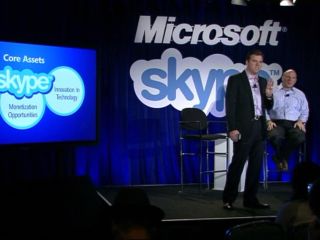 Skype has been sold. Again

It's been a strange week in technology, because the biggest names in tech appear to be travelling backwards in time. Not only that, but time travel seems to be addling their brains. How else can we explain the phenomenon of huge tech firms digging up other firms' less impressive ideas?

First up there was Google, whose Google I/O event this week unveiled lots of things that looked awfully familiar.

There was the unveiling of Google Music, a US-only MP3 music locker that looks awfully like the beleaguered MP3tunes.com.

There is one key difference, though: Google has more money than MP3tunes, so it can afford to launch its service without worrying about the record labels. Poor old MP3tunes has been embroiled in legal action for years.

That's not Google's only new old idea. Android gets iTunes-style movie rentals, and despite tablet computers laying waste to the entire netbook sector - and bits of the laptop market too - Google is pressing on with its Chromebooks.

Chromebooks are Google-powered netbooks that will be available to buy and to rent, and as Techradar's very own Dan Grabham's hands-on review demonstrates, they're pretty nifty - at least, they are when you've got an internet connection.

When it comes to old ideas, Chromebooks are based on one of the oldest: the thin client, where centralised computers do all the work and low-spec terminals - thin clients - are used for input and output. It's a huge gamble, and we can't wait to see how successful - or otherwise - Chromebooks become.

Remember the Spot watch, Microsoft's vision of computer-powered watches that fell spectacularly flat a few years ago? Google clearly does, because among all the sensible announcements about Android Ice Cream Sandwich we also heard about Android-powered watches and even Android home automation.

As Tap! magazine columnist Ian Betteridge put it on Twitter, "Home automation and smart watches. Is this a Microsoft developer show from ten years ago?"

Mind you, Microsoft appears to be time travelling too. Remember when eBay bought Skype for around two billion with a half-arsed idea about getting bidders to Skype sellers, a move that turned out to be one of the dumbest in the tech industry's history?

History appears to be repeating. Microsoft is acquiring the firm for not one billion, not two billion, but eight and a half billion dollars.

"On the face of it, Microsoft's purchase of Skype seems insane," TechRadar columnist Gary Marshall writes, pointing out that Microsoft already has voice over IP software (Lync for enterprise firms, Windows Live Messenger for everyone else) and that Microsoft's opening bid appears to have been "all the money in the world".

"Does Microsoft have more money than sense?" Apparently not. The acquisition "is about two things. It's about phones, and it's about Facebook." Putting Skype on Windows Phone handsets might annoy the network operators, but it should sell plenty of handsets.

And Facebook? "Integrating Skype with Facebook would be a win-win situation for Microsoft and Facebook alike, with the former gaining access to Facebook's massive user base and payment system and the latter getting a voice and video system without having to spend any money building it," Gary argues.

If Microsoft doesn't mess it up - for example, by "offering to pay for the whole thing in Microsoft points" - then history might not be repeating after all: "If Microsoft gets it right it could prove to be one of the smartest - and most successful - investments the firm has ever made."