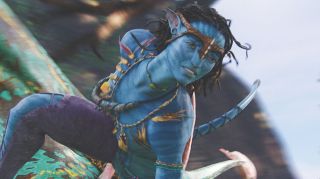 Avatar gets some big love at the cinema

James Cameron's Avatar has knocked off James Cameron's Titanic as the biggest film of all time at the box-office, reaping in a staggering $1.842 billion worth of ticket receipts so far.

The film, which has been pitched by many as the linchpin to the whole 3D revolution, has had some glowing reviews from critics and audiences alike and does go some way in proving that 3D isn't a gimmick but actually something which has sparked a resurgence in going to the cinema.

Around 65 per cent of tickets sold outside of America were for the 3D version (70 per cent in America) of the film, with the foreign box office playing a major part in the movie's success – accounting for 70 per cent of the movie's income.

The UK contributed a far-from shabby $93.2 million to the film's success.

The runaway success of Avatar, which also boasts being the fastest film to hit $1 billion at the box office, may well have been helped by the fact that 3D films in the cinema cost more per ticket and analysts are also noting that inflation will also play a big part for the numbers.

Whatever the case, James Cameron is once again the most bankable director in the world. Let's hope he doesn't take another 12 years to get his next film made.