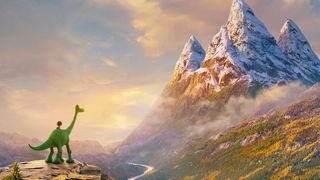 Highly regarded and fiercely imaginative, the films of Pixar Animation Studio are known for their ability to strike an emotional chord with audiences and critics alike, while pushing the technology of animation in bold new directions.

While the company has gone on record saying that it places characters above technology when developing its stories, there's no denying that the tech behind its latest film, The Good Dinosaur, has allowed the film to embrace a dino-sized scope unlike any other film it's made before.

Though the studio elected not to release a film last year (making it the first year since 2005 to not yield new entry in the Pixar canon), the extra time has allowed it to regain its mojo and return with a vengeance in 2015, having already released the hugely successful masterpiece, Inside Out, and gearing up to release its next film, The Good Dinosaur, at the end of the year.

This makes 2015 the first year that Pixar has ever released two feature films, and the studio's not slowing down there – in 2016 we'll be getting Finding Dory, the sequel to Finding Nemo, followed by Toy Story 4 and the brand new property, Coco, in 2017.

techradar was given the opportunity to attend a presentation highlighting the tech behind The Good Dinosaur headed by Jim Morris, president of Pixar Animation Studios – as an added treat, Morris also divulged some inside info on the company's upcoming slate of films.

Current page: The future of Pixar