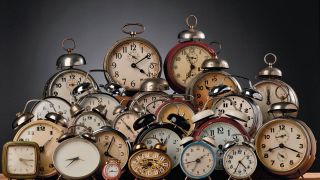 Time is ticking for these products

Technology is fun, but it's also fickle. The incredible pace of change can render devices, companies and even entire product categories redundant overnight.

Devices whose lives began with tech-crazed consumers fist fighting in midnight queues eventually end up left in lofts, given away on Ebay or sneaked into someone else's skip, and what seems like pretty hot stuff today is likely to leave you cold in a few years' time.

In most cases devices fall from grace because something better comes along, but that isn't always the explanation. Some technologies fail because of bad business decisions, or because a rival did a better job of marketing, or because a lesser technology is more convenient, portable or just plain cheap.

So which technologies will we most likely say "sayonara" to in 2014, and why? Let's peer into our crystal balls.

FM will soon be the preserve of angry talk radio phone-ins and ultra-local Fab FM stations: in 2013 more people in the UK listened to DAB stations than analogue ones. The digital radio switchover still doesn't have a date but coverage is improving, car and van firms are fitting DAB radios as standard and the cost of standalone DAB radios has plummeted. That's great news for anyone who likes FM but wishes it sounded worse and was harder to receive.

The writing's on the wall for feature phones in the developed world: smartphones are already outselling them and analysts predict 2 billion smartphone users by 2015. We're seeing a massive shift in mobile communications: instead of phones, we're buying computers that just happen to have phone apps installed.

The best camera is the one you have with you, and for most of us that means the cameras in our phones. They might not be as good as dedicated DSLRs or high-end video cameras yet, but they're more than capable of fending off low-end point and shoots and cheaper camcorders - not least because they're more convenient, enabling you to have your pics or clips on Facebook or Twitter within seconds of shooting. The tech's getting better and better, limiting standalone shooters' appeal to enthusiasts and pros.

CES 2013 was all about the 3D TVs, and CES 2014… wasn't. Vizio, the US's biggest seller of LED TVs, dumped 3D this year to focus on 4K/UltraHD instead, and the director of the Consumer Electronics Association told Variety that the industry has "stopped talking about them." 3D isn't dead, though. It's just taking a timeout until glasses-free 3D is ready for prime time.

DVD players are being attacked on all sides: movies are better on Blu-Ray, kids' movies are cheaper on Netflix and LoveFilm, and box sets are widely available on demand and on streaming services. Blu-Ray needn't get too cocky either: 4K streaming is getting its boots on and gearing up for action, and while streaming doesn't deliver the full Blu-Ray experience - services such as Netflix have no interest in giving you three different cuts and a director's commentary - the convenience and affordability of online delivery more than compensates.

BlackBerry isn't dead - CEO John Chen told Bloomberg TV in January that it's partnered with Foxconn to make new handsets, which will be predominantly QWERTY keyboard-based. But it's gone an awfully funny colour. The former king of connected phones is now far behind Windows Phone, and if we were betting types we wouldn't put any money on a spectacular comeback.

You used to see them in kitchens, in caravans and in kids' bedrooms: little screens, some of them with VCRs and some of them with DVDs. They're becoming an increasingly rare sight, though, with good reason: why drop good money on a portable TV when you can buy a more useful tablet for the same money, using on-demand streaming when you can get online and an SD card or USB stick when you can't? Portable DVD players are going the same way: unlike them, tablets don't skip when you go over bumps or lose entire video libraries to jammy fingers and scratches.

One of the last few reasons to use a landline - the ability to call freephone numbers without racking up insane call charges - is about to disappear. In the UK Ofcom has ruled that freephone should be free from *any* phone, and while the change won't happen until 2015 the publicity will start in 2014. You might still have a landline for your broadband, but you'll probably do all your communication on your mobile, tablet or computer.

The latest standalone sat navs are fantastic bits of kit, but they face the same "good enough" problem that's killing other stand-alone gadgets. The sat nav in your smartphone is almost certainly good enough to get you where you need to go, it's always up to date, and it's always with you - including when you get out of the car. If you're a million-miler then a dedicated sat nav is a sensible investment, but it's overkill if you only ever drive to the shops.

We know what you're thinking: surely we can't be pronouncing curved TVs dead when they've only just been invented? Bear with us, though.

While curved screens make sense as monitors and in enormous cinemas, they're pretty useless in normal living rooms. They cost more, they're rubbish for wall mounting and they actually make viewing worse unless your whole family sits uncomfortably close to each other and to the screen.

The trend is manufacturer-driven, not consumer-led; it's something that makes sets stand out in showrooms and little else, and if it finds a mass market beyond exciting signage it's proof that marketing can sell us anything.