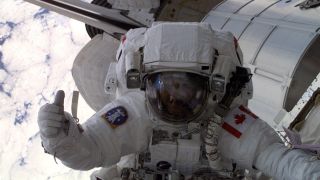 It's a crisp November afternoon in London, and 20 years from the first time Commander Chris Hadfield looked up at the space shuttle Atlantis, he's about to take the stage and speak to a packed audience at the Centaur Festival of Marketing.

It feels a little strange that a man of science and military training is talking at an event for marketers and brands, but Hadfield is a brand himself, and a massive one. For example, his cover of David Bowie's Space Oddity, recorded in the International Space Station, has had more than 25 million views on YouTube – so the delegates are keen to learn anything he can teach them.

His talk is billed as "tips to help marketers get over their fear," and promises to teach them how to use social media to connect the world on and off-planet. What follows is nearly an hour of captivating discussion about the wonder of space and earth, full of jokes, beautiful imagery and terrifying stories of near misses in the darkest void.

We've compiled the best quotes from his talk and short video clips from our post-talk interview, courtesy of Festival of Marketing.

1. 'Make it good for yourself and share it with everybody'

Tim Peake, the UK's first official astronaut, is set to inhabit the ISS from December 2015. Already on social media, but yet to quite capture earth's imagination the way that Chris Hadfield has, we asked Chris what his advice to Tim would be:

Space travel is hazardous even when successful. The primary mantra Hadfield revealed astronauts say is "what's the next thing that's going to kill us?" by way of being sure they prepare for all eventualities.

As the space shuttle rockets burn fuel at 12 tonnes per second, it's the equivalent of 80 million horsepower: "When the big solid rockets light, you are going somewhere for sure"

Even climbing into the Soyuz can be risky. As Hadfield says: "If you bump a switch you die". Staggeringly, he tells us that "the odds of dying during a space launch is about 1 in 38 – in real world terms that's 22 airplanes crashed a day if you use British Airways flights."

And aside from surviving launch and entering the Soyuz module without damaging anything, Chris had some pretty scary experiences aboard the ISS. He recounts a story about when a NASA-led computer upgrade went unexpectedly wrong:

"The lights went out, all the fans shut off, the vehicle started tumbling through space out of control and we lost communication with Houston – thank you very much earth, appreciate that – so what do you do next?"

The crew survived by being experts in their fields and then some. Hadfield continues: "You need to have those skills within this group of people to be able to dig out all the software and reboot all the computers and start getting control of the vehicle. It took days"

Another time, a crew member noticed a substance falling from the exterior of the station. Upon realising the ship was leaking liquid ammonia coolant (which keeps the batteries and electrical support cool throughout the station), the crew needed to take urgent action: "Houston called us, and said: 'We need you to do this spacewalk tomorrow.'"

A procedure like this would usually demand seven or eight days of preparation – simply unavailable in an emergency situation. So the crew brainstormed with ground control and found a way to complete the procedure in one day. The successful EVA (extravehicular activity) to fix the leak ultimately took about six hours.