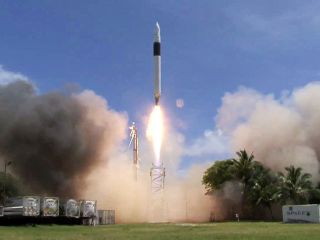 We have lift-off! Falcon 1 goes into orbit

Elon Musk's dream of getting a greenhouse on Mars has come one step closer after his self-financed rocket reached Orbit at the weekend.

The rocket, created by his company SpaceX and titled Falcon 1, took four attempts to get airborne, but can now proudly call itself 'The first privately developed liquid fueled launch vehicle to achieve earth orbit'.

Which is exactly what Musk did on his company's website, soon after launch, and he added six – count them – exclamation marks at the end just to prove the importance of this!!!!!!

Musk made his money from PayPal, the safe cash alternative for shopping on the web, selling the company to eBay back in 2002 for a cool $1.5 billion in stock.

In recent times, Musk has tried his hand at film producing but it's the space race where his interests lie. Falcon 1 is one of two rockets in his fleet, the other named Falcon 9.

Musk's plan is to revolutionise the space industry, investing in low-cost satellite launchers and hopefully creating an affordable alternative to space travel.

Musk's Falcon 1 last hit the headlines back in August, when the rocket failed to deliver James Doohan's – the actor who played Scottie in the original Star Trek series – ashes into space.