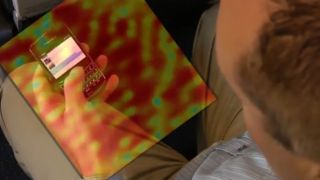 The Chicago, Illinois-based behemoth wanted to test the required signal strength and configurations necessary to make reliable Wi-Fi available to around 300 passengers on-board its jets.

Instead of hiring good, old fashioned humans as subjects, the company snapped up 20,000 pounds of the carb-filled, chip-makers and dumped them in seats like... well, like a sack of spuds.

According to Boeing, the potatoes reflect and absorb radiowave signals in the same ways as more expensive humans and were the ideal subjects for its latest rounds of tests.

Spuds on a plane

Using humans would have required them to sit motionless in test planes for days on end while the data was gathered, which wouldn't be so bad if there was some decent in-flight movies.

The company said the testing process, made much shorter thanks to the potatoes, will enable it to provide consistent Wi-Fi speeds and signals, while travelling at 35,000ft and 500mph.

Boeing's new methods will offer more reliable connectivity while ensuring that the Wi-Fi signal and device usage does not interfere with the critical systems on the aircraft.

The name for the project? Synthetic Personnel Using Dielectric Substitution. We see what you did there Boeing. Well played.