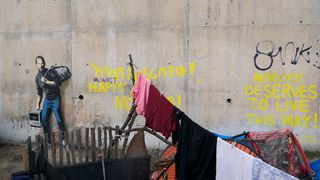 Renowned and mysterious graffiti artist Banksy has presented another perspective on the Syrian refugee crisis with a new piece.

The artwork appears on a concrete bridge in the so-called Jungle refugee camp in Calais, France, depicting the late Steve Jobs, the son of a Syrian migrant, as a refugee.

In the graffiti work, Jobs carries a large sack-like bag over his shoulder with one hand and a Macintosh in the other.

Images of the work are posted on Banksy's website, with one caption reading "The son of a migrant from Syria."

"We're often led to believe migration is a drain on the country's resources but Steve Jobs was the son of a Syrian migrant," Banksy said in a statement, as reported by the BBC.

"Apple is the world's most profitable company, it pays over $7 [billion] (£4.6bn) a year in taxes - and it only exists because they allowed in a young man from Homs."