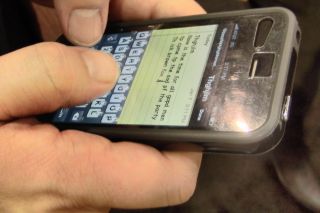 With the flood of new products at CES it's easy to miss the neat tech lurking on some of the smaller stands. So we've gathered together some of the stuff that stood out for us.

The smartest of smartphones are getting HDMI connections to plug into your TV, but just about everything has a micro USB port.

The MHL consortium including Nokia, Samsung, Sony, Toshiba and Silicon Image - if it doesn't stand for micro USB HDMI link, it ought to - uses a micro USB to HDMI cable that charges your phone when you plug it into your TV to play video (1080p with audio) or photos, which is such a neat and obvious combination we're surprised no-one has done it before.

New devices from this summer will have the protocol built in and adapters will make it work for devices that already have the connectors – which should be the vast majority of devices.

The equally impressive HDBaseT protocol won't be easy to retrofit, but it's already in professional video equipment and it should be in some TVs, projectors and AV receivers this year. Sony, LG and Samsung are the founding members of a spec we think actually deserves the overused 'revolutionary' compliment.

You can already get power over Ethernet, or a network connection over power cables, or video and audio over USB (we saw demos of 1080p video at 60fps over USB 3), or USB over DisplayPort (look for USB 3 cables that are the 15m length of DisplayPort rather than 3m later this year when Icron's chipsets start getting built in to screens, PCs and USB hubs).

DBaseT does it all, putting power, network, sound, video and USB connections over a single Ethernet cable that can be up to 100m long.

Want your flatscreen TV on the wall? You don't need an electrician to put a power socket in the right place. Plug your TV, PC, PS3, Blu-ray player and the rest into the HDBaseT router and they all get power, 100Mbps network connections, full uncompressed HD video and HDMI 1.4 audio – and any USB peripherals you have plugged in work (so you can play Guitar Hero in bed even if your Xbox is in the living room).

The demo we got had virtually no latency and the only drawback is the relatively slow network connection but 20Gb connections are already on the roadmap. (And if you're wondering how it works, it's an Ethernet connection with a powerful digital signal processor sorting the five signals out).

Among all the iPhone blood pressure monitors and Bluetooth pedometers and personal health gadgets at CES the ones we really like include the Zeo sleep tracker, a headband that measures how deeply you sleep the same way electrodes glued to your head do (but less stickily) – it actually detects your brain waves.

If you want to know if coffee in the afternoon keeps you awake at night or if jet lag tips actually work or if your spouse's snores really wake you up all the time, you can measure it.

When you stumble down to the kitchen in the morning, the new Simple Human kitchen bin will open as soon as your hand gets near it and close when you're done (six D cell batteries last up to a year because the sensor can tell it's you rather than the dog trying to get at the chicken bones you threw away).

And if you're facing the indignity of bifocals, Pixel Optics digital lenses will be in the UK by the end of year; you get a single lens in your glasses with a button on the side you tap when you need to read something you'd otherwise need a second lens (or a second pair of glasses) for.

This turns on liquid crystals embedded in the lens that switch it to correcting for long-sightedness instead of short. It will cost about a third more than the most expensive progressive lenses at first and you have to charge the glasses every two or three days, but if you hate bifocals you'll love it. Now we'd like to see them add Bluetooth and give us a jet-fighter style heads-up display.

Synaptics doesn't just make the touchpads in most notebooks; their touch screens are already in phones like Nokia's N8 and HTC's top Android and Windows Phone 7 models.

TRACK IT: If you like the trackpad on your notebook, how about one for your desktop? The textured base will stop it sliding as you swipe around

All that multi-touch is going into touchpads too; expect notebooks with touchpads that have more gestures and no physical buttons (you can still click but you won't get dust, fluff and sesame seeds stuck underneath).

You won't need to turn your touchpad off when you type either; the new pads will be much better at knowing when it's your palm brushing the pad in passing. And we like the look of the trackpad you can plug into a desktop PC like a mouse (or use wirelessly to control a PC or Google TV from the sofa); Synaptics is calling it a reference design PC and peripheral makers can licence but it might also make and sell one itself.

If you've ever wished you could get an iPhone with a real keyboard, check out the 4i Thumbs2; it's a $30 screen protector with little ridges in to help you get your thumbs in the right place for the keys. I can barely type on the iPhone screen at all but with the Thumbs2 I could practically touch type.

TOUCH 0 THUMBS 2:The screen protector that turns the iPhone screen into a tactile keyboard

The iPhone 4 version comes out late February and slides into the bumper case; a sticky but removable version for other models is on the way too.