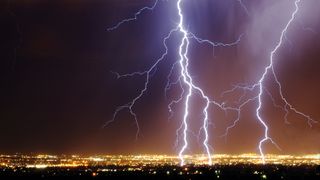 Lighting may be attracted to iPods, so leave yours at home while storm chasing

Ever since the first Neanderthal picked up a rock and accidentally brained himself with it, humans and technology have had a difficult relationship. Over the years we've been told that all kinds of devices are bad for us, from bicycles causing "bicycle face" to iPods making the lightning gods angry.

Unfortunately, some of them really are bad for us. Some tech-related conditions are funny, others unlikely and still others funny and unlikely. It takes a heart of stone not to giggle at someone who's burnt their unmentionables on an overheating laptop, no matter how sympathetic you might be or how painful the results, but many are deadly serious.

As Professor Tony Kochhar, an expert on upper limb and shoulder injuries and Professor of sports science at the University of Greenwich, told TechRadar: "We had to operate on a lady who had used her phone so much to send emails, the tendons actually ruptured and had to be reconstructed."

As we'll discover, many of our favourite gadgets have one thing in common: if we use them the wrong way, they can seriously damage our health.

Gorilla Arm isn't a recognised medical condition, but the term has been in general use since the arrival of touch-screen displays and light pens in the early 1980s. It's the tiredness and discomfort you get from holding your arm out in front of you to make small movements, and while it isn't particularly serious it's fairly unpleasant.

This condition isn't just limited to Nintendo. Originally known as Leather Thumb and occasionally dubbed Gamer's Grip or BlackBerry Thumb is a repetitive strain injury that affects the thumbs of gamers and texters. It can be very serious if it isn't addressed, leading to painful issues such as tendinitis and carpal tunnel syndrome.

As Professor Kochhar says, Nintendinitis and similar conditions are the result of "performing a manoeuvre over and over again too many times, for long periods, without rest. These tissues have a relatively poor ability to heal, so resting overnight often is not enough." Smartphone users aren't exempt either: the professor "recently saw a lady who had tendonitis in her thumb" from using her thumb to scroll on her smartphone.

Many tech-related injuries are due to poor posture, and iPad Shoulder is one of them. It's pain in the neck and/or shoulder from looking at a tablet in your lap. "Sitting over a laptop or iPad hunched forward causes the neck to flex forward, straining the muscles in the upper back and neck and progressively squeezing the discs in the cervical spine," Professor Kochhar says. "This will lead to nerve irritation. Posture also plays a part with the wrists and hands. Most of us hold our iPad in the same way, but that's roughly 0.7kg held with the same wrist and finger muscles for hours."

Playstation rash is a skin condition first diagnosed in a 12-year-old girl in Switzerland who suffered from painful lesions on her hands. According to the British Journal of Dermatology the cause turned out to be her PlayStation controller, which she was gripping too hard for too long and causing "minor but continuous trauma" to her skin.

Some of the newspaper coverage has been a bit overheated - in 2011 the Telegraph reported that a single chiropractor had already treated "thousands of patients" for texting-related injuries, which seems rather unlikely. But text neck comes from the same place as laptop shoulder: it's neck, shoulder and upper back pain caused by poor posture while staring down at a screen.

In 2006, doctors warned that listening to an iPod during a thunderstorm risked being hit by lightning - and just two weeks later Jason Bunch, a Denver teenager, proved them right. "I woke up and blood was coming out of my ears," he told reporters. Cases remained scarce, however, and in 2009 UK teenager Sophie Frost claimed that rather than attracting the anger of Zeus, her iPod saved her life when she was zapped from above. Her friends promptly nicknamed her "sparky".