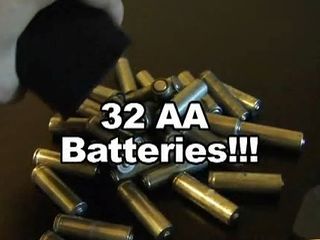 No, you can't get 32 AA batteries from a 6-Volt battery

The global scandal caused by sexy pretend resignation girl a couple of weeks ago is nothing new.

Bored people on the internet have been trying it on for years, leaving a trail of embarrassed hoax victims behind them. Have you just emailed a very old advert around the entire office? Is that amazing leaked US military footage from Roswell actually a clip from last night's Shooting Stars, in which Bob pulled entrails out of Vic's fake alien torso?

Probably and probably. We'd like to reassure you and say there's nothing to be ashamed of in falling for obvious online hoaxes and misunderstood videos, but actually there is. No one likes getting the same thing emailed to them 20 times a day, and if you're consistently pinging through tired old tat to people, you're in danger of hitting their mental spam filters.

So don't email any of the below links around, or believe their lies. We've seen them all before and obviously didn't fall for the them first time around. Oh no, we always knew there was something not quite right about this lot...

Never mind April Fool's Day, the day before a high-profile Apple event is the easiest time of year to pull off a successful hoax. Any idiot who draws an Apple logo on the back of a fag packet and sticks it on Twitter has a chance of fooling the world.

The largest Apple hoax was perpetrated by web entrepreneur Jason Calacanis in the hours before Apple's iPad reveal. It seemed perfectly reasonable that a successful blogger might be granted pre-announcement access to Apple's new tablet under an NDA, so his string of Tweets about it - with facts like "has a solar panel" and "uses fingerprint recognition" seemed plausible. For literally about six hours.

It's amazing! Some kids just took out a video camera and made something incredibly professional and way too good to be true. And yes, it was too good to be true - Bike Hero was basically an advert designed from the ground-up to go viral, created to build hype for the Guitar Hero brand. You emailed an advert around the office, is what happened.

Of course, no one believed this was real at the time. That's always the defence. The mad office destruction clip was later revealed to be a viral advert for Hollywood blockbuster Wanted, so you were right.

Twitter's a double-edged sword when it comes to hoaxes. On the one hand, it's easy to make a lie go viral - Tweeting that John Leslie died in a light aircraft accident on an internal flight between Southampton and Edinburgh is easy, and might just take off. On the other hand, it also makes shouting down hoaxes easy. Take poor Bill Cosby. The first thing he has to do most mornings upon waking up is Tweet that he's still alive, as the poor comedian's a regular on the death-hoax listings.

To our educated, modern eyes, the 2006 Leeroy Jenkins YouTube clip simply has to be a fake. The suspiciously long intro sequence packed with extra-mundane calculations and tech speak - surely that would've been edited away by a man clever enough to record his own Warcraft battles? If Leeroy hit the web today he'd be decried as a fake by thousands within hours. Mind you, isn't everything?