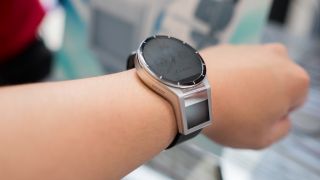 Smartwatches are as vulnerable to hackers as any other gadget, and according to security researchers they could even allow a digital intruder to guess what you're typing.

A team from the University of Illinois at Urbana-Champaign built an app for the Samsung Gear Live that looks at the data coming from the motion sensors, tracking the micromotions of keystrokes.

They found that using a "keystroke detection" module it's possible to take a guess at what word is being typed from the movements of the left wrist. You can see how it works in the following video:

The team says that its proof-of-concept code could be hidden inside a simple pedometer app. But the researchers also say that by reducing the sample rate of the sensors in the watch, such an attack could be nullified.

"There are a lot of good things that smart watches can bring to our lives, but there could be bad things," said He Wang, a PhD student in electrical and computer engineering at Illinois. "So if you think from that perspective—if there are any 'bad' things we could do—we can help other people protect their privacy, or at least make them realize there's a potential problem."