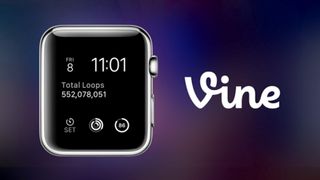 Need your video fix on the go? Vine's got you covered, thanks to an update bringing looping videos to Apple's wearable. The new Vine update also improves finding related vines on mobile devices.

The Vine experience on the Apple Watch is simplified in comparison to the smartphone and tablet version, showing vines saved to a user's favorites as well as featured vines getting a lot of buzz. While only saved and featured videos are currently visible on the smartwatch, users can still like and re-post vines to their feed with just a tap on the wrist.

"When we set out to build Vine for the Apple Watch, we focused on making sure that you can quickly access the content on Vine that is most important you," posted Vine iOS Engineer Simon Corsin in an official blog post. "We hope you like it."

For those not using the Apple Watch, the update also allows for Vine users on iOS to discover related vines by swiping left while perusing their feed. The update is currently exclusive on iOS, and while Vine making its way to other smartwatches might be a stretch, an Android version of the update arriving in the future is more than likely.