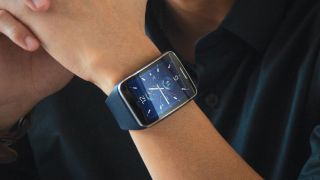 Apple Watch is here for pre-orders and the entire tech world is going nuts – apparently even Samsung is jumping for joy this morning as the Cupertino giant takes the step toward the wrist.

Rory O'Neill, Samsung VP for mobile in Europe told CNBC the company is "delighted" that Apple has followed the company into the wearable arena.

"It's with great delight that Apple has followed us into that market."

It's true a major competitor in the smartwatch game will make all the Android Wear manufacturers up their game in a market that seems to have stagnated in the last year and a half, but Samsung has already fired out a number of wearables.

In fact, Samsung sped up production of the original Galaxy Gear in response to rumours that Apple was working on an 'iWatch' at the time.

Samsung managed to get its wrist buddy out of the gates first - in fact it managed to get a full six smartwatches out before the Apple Watch was even announced - but it's yet to be seen whether Apple's effort will be more successful.