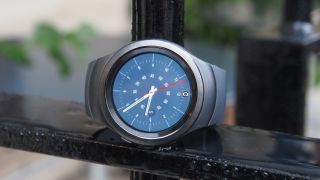 The Samsung Gear S2 is in line for an update.

If you're rocking a Samsung Gear S2 on your wrist then it sounds like you're in for a few treats in the weeks ahead: the company's flagship smartwatch is rumoured to be in line for a major software update in the near future.

SamMobile reports that the new update will be the "biggest yet" for the smartwatch and include new features like custom photo backgrounds, watch face recommendations, and a more standalone experience for your wrist-based computer.

Of course with the watch running Samsung's own Tizen OS, a lack of apps compared to Android Wear or the Apple Watch can be seen as a shortcoming - which means the software that comes built into the device is even more important.

A matter of time

Other new features in the pipeline include the ability to post fitness stats straight to Facebook, plus improved fitness tracking overall and a new sleep monitor feature. Better notification management is also tipped to appear in the update.

SamMobile says Gear S2 owners should start seeing the new software in "the coming weeks" though there's no official word from Samsung yet. It's possible that the OS is being updated in preparation for the launch of the Samsung Gear S3, which may or may not happen at the IFA event in September.

Apple and Google won't be standing still either and updates to both their smartwatch OSes are scheduled to arrive at some point in the autumn. We'll have to wait and see whether all this new functionality is enough to tempt a new wave of smartwatch buyers to splash the cash.

What's the deal with the new Fitbit Blaze smartwatch?