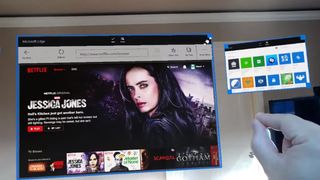 We know all about the potential of the HoloLens and other augmented reality gear, but we've seen very little in the way of actual real-world demos. Fortunately, a couple of Microsoft engineers are sharing some previews of the device in action, recorded on the HoloLens itself.

You can check out Halo 5 streaming from an Xbox One, as well as Netflix running through the Microsoft Edge browser and a few YouTube clips hovering in mid-air. If casual gaming's more your scene, check out Candy Crush on HoloLens.

The demos show off the versatility of the HoloLens: given a 2D video input, the headset can have it float in front of your eyes as you move around or fix it in position somewhere in the room (up on a wall, for example).

A long way to go

However, those who've played around with early prototypes of the device are warning that the user experience isn't quite as smooth as it looks in these videos. The narrow peripheral field of view doesn't come across in the YouTube clips, for example, but don't let that dampen your AR enthusiasm.

Developer editions aren't going on sale until next year, so it's going to be a while before consumers can get their hands on the HoloLens. Nasa astronauts on board the ISS are next in line for a demo.

When it does arrive, the HoloLens is going offer a whole range of applications for business and consumer use, including the facility to play Minecraft on your living room table. While you wait for it to launch, read up on everything we know about the HoloLens so far.