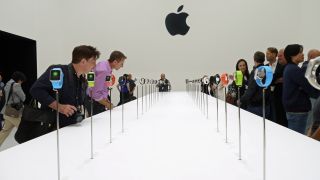 The Apple Watch officially goes on sale on April 24, but you won't be able to walk into an Apple store and leave with the Watch on your wrist. There are however, a select number of fashion outlets that will let you do just that.

There are specifically six stores around the world who will have Apple Watch from tomorrow, giving you the traditional experience of entering a store and walking out with your new gadget in hand.

Those stores include Dover Street Market in London and Beijing, Maxfield in LA, Colette in Paris, 10 Corso Como in Milan and The Corner in Berlin.

If you're planning to buy in store you're going to need to reserve before you head on down to any of the high-end boutiques as stocks are very limited.

The Apple Watch Edition in gold is apparently sold out in the Dover Street Market store and it only has 1,000 watches split between its London and Beijing stores.