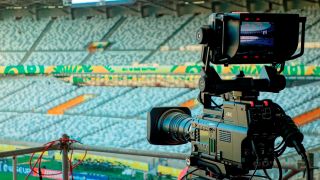 The World Cup will be shown in 4K... sort of

Footy fans in Brazil will be able to enjoy World Cup matches this summer in 4K courtesy of host broadcaster Globo.

The Latin American media company announced overnight that it will be setting up a batch of Sony's 65-inch 4K TVs in Rio's Jardim Botanico neighbourhood.

It'll only be for three games – a second round match, a quarter final and the final itself – so the same ones we were told back in April would be getting the fancy 4K treatment.

It's a nice gesture, isn't it, given that most locals simply won't be able to afford tickets to the matches. But will anyone else be able to see these games in 4K, we ask?

Seems very unlikely at the moment. Japan is rumoured to be trying to get 4K TV broadcasts up and running in time to show the games, but for everyone else the infrastructure simply isn't available.

The most optimistic speculator might posit the existence of a secret plan to pipe the Ultra HD feed to 4K TVs over the web. But frankly we estimate there's even less chance of that happening as of England making it out of Group D.