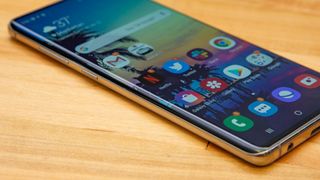 Another phone with a curved display, the Samsung Galaxy S10 Plus (Image credit: Future)

Curved displays are a big trend in smartphones with devices like the Samsung Galaxy S10 Plus and Huawei P30 Pro boasting screens that start to curl at the edges. Now, it seems Oppo has decided to one-up the competition with its new 'waterfall screen' tech.

Originally shown off by Oppo VP Brian Shen on Chinese social media service Weibo, before being shown to select Chinese press, we could see the waterfall screen tech used on the Oppo Reno 2, or another upcoming phone from the company.

The titular feature of the waterfall screen is its curved edges – the sides of the screen slope away on the left and right at 88 degree angles, which is far steeper than the displays in other handsets with similar screens.

That means it's far more pronounced than in other devices, and you can easily see from a distance that the display is curved. The display also stretches further down the sides of the phone, compared to other devices, so it's definitely a novel aesthetic to have.

With the waterfall display, and the relatively minor bezel to the top and bottom of the phone, the screen-to-body ratio is likely unprecedentedly high.

As the display takes up a lot of the sides of the phone, that means there are no physical buttons. At the moment we don't know what Oppo plans to do instead, but it'll likely be capacitive buttons that you press like physical ones.

Also missing from the body of the phone is a front-facing camera. and there are two possible locations for it. One is that Oppo has already shown off its under-screen camera tech, and the waterfall screen could be hiding a sensor under the surface.

The other possibility is that the smartphone has a pop-up camera – Oppo has previously used this tactic, with the Oppo Reno and Oppo Find X going for this option.

One last feature of the display is that it doesn't seem to be 19:9 as a lot of modern smartphone displays are. Instead it looks more like 21:9, which is an aspect ratio we've seen on a few phones like the Sony Xperia 1, but it's far from a common thing for handsets.

All-in-all, the waterfall screen looks like a rather radical departure from many common features in phones. For now we don't actually know what phone we'll see the tech in: perhaps the Oppo Reno 2, Oppo Find Y, or another, unnamed device.