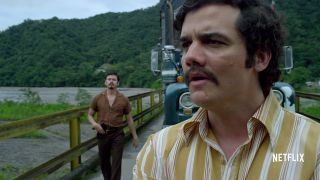 Netflix sabotaged many a New Year's Resolution today by announcing that it will produce 31 new original series in 2016, about double what the company put out this year.

The announcement came from Netflix Chief Content Officer Ted Sarandos at the UBS Media Conference this morning. Sarandos also said that audiences can expect 10 new feature films, 30 kids' shows, 12 documentaries and 10 stand-up specials that are, as he says, "quality stuff."

The news about the original content comes on the heels of the debut trailer of the new Crouching Tiger, Hidden Dragon sequel, subtitled Sword of Destiny (embedded below).

Considering that Netflix has only been in the original content field for the past five or so odd years, 31 new shows is quite an achievement should they have the same production quality that we've come to expect from Netflix's publishing side.

While Sarandos didn't name specific titles, of the 31 new entries, there's likely to be some more big names (the Wachowski siblings and comedian Aziz Ansari both found success with original content this year), as well as more franchises seeing the platform as a viable platform.