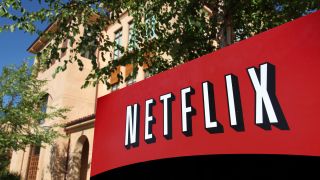 After years of false starts, there's a real buzz around the future of TV again – and for once it's got nothing to do with 3D.

4K is set to be the next big thing on our goggleboxes, asking us to shell out thousands once more to get the brightest and fanciest pictures ever beamed into our eyes, and is even easier to get your hands on now Netflix has announced tiered pricing plans which include a 'Super HD' option for a little more cash each month.

But before you start sighing and working out how many months you'll have to save to afford that 60-inch TV to replace the one you only bought last year, we've got some bad news: fresh from announcing its big plans to deliver 4K over the 'net, Netflix is already envisaging the next generation of how we're going to watch TV.

While ultra HD is the thing that's got us all talking, apparently there's a massive change coming that's going to seismically shift the way content is shown and produced; suffice to say, you best get saving for that new 110-inch telly in 2018 as well…

"The next 2-3 years are going to be a fun ride," says Netflix's Neil Hunt, as we meet in a hotel room festooned with images of the streaming service's popular shows and more TVs than seem appropriate.

There's also an embroidered Netflix Quillow (quilt in a pillow) that we're starting to fall in love with, but lose interest as Netflix's chief product officer warms to his theme.

"The question I have is: how do we get from where we are today, which is fundamentally [viewing] the same picture you've been watching on the big screen for years, and turn that into the next level of evolution?"

It's a tricky question – TV is such a commoditised element of daily life that how do you find new ways to change something most would rather was left alone?

Hunt thinks he has the answer – and it's a necessary one given he thinks 4K isn't going to be enough for some people. "I personally have an expectation that by 2016 we'll have run out of resolution innovation. And the next thing will be 'wide field of view'. You heard it here first.

"Currently the guideline for a TV is that you view it from a distance equivalent to 1.5 times the screen size. What that means is when the director of photography shoots a scene he knows which wide angle lens to put on to make the perspective look elongated from normal.

So what is the answer to solving the distance problem? Hunt thinks it will take a radical re-imagining that will cause nightmares for set designers, producers and directors.

"The next innovation is for a screen that doesn't just fill 30 degrees of your vision but goes to 120 degrees field of view.

"That means a 100 inch widescreen that you view from the same couch distance as today. The interesting angle will be in the centre, but there will be added ambiance for the other two thirds around the edge."

It seems unlikely that this will even begin in 2016, as it will require a number of huge changes to an industry that's still trying to come to terms with the enhanced clarity 4K will bring. Hunt admits that it will initially require a set of standards to be adhered to, as well as working out how to show 'field of view' content on a regular screen, as just squashing it down will create a crazily distorted image.

And that's before the directors, actors and set makers get their head around the conundrum of working out how to 'channel' viewers' attention to separate parts of the screen – but as Hunt points out "it's something that the Imax guys have mastered, and we'll have to get that into home use."

With the likes of Sony and LG showing off short throw projectors at CES 2014 earlier this year, the ability to have a massive TV in your current lounge suddenly seems much closer to reality.

When is UHD not really UHD?

While most of the TV manufacturers are desperate to convince the watching public that 4K, or Ultra HD, is the next big thing, in truth it's still very much in its infancy – with content pretty hard to come by.

Hunt admits 4K isn't a deal breaker right now, calling it a 'passion project', but believes it's something that Netflix needs to be shown as leading in to dispel the notion that the online service is a low quality streaming platform.

"We're doing [4K streaming] partly for its brand value, to establish ourselves as leader in the space. The key piece for me [with 4K] is the goal here is to be at the forefront of delivering the best possible quality.

"You've to imagine that the number of 4K sets compared to the amount of content we have is not going to deliver much practical value, but it's going to help to cement the Netflix brand, as something that's not scratchy 320p webisodes.

"The nice thing about streaming video is that you can build 4K relatively inexpensively and deliver it to the 0.1% of customers that have the necessary TV.

"If you're trying to do that as a traditional broadcaster, the amount of infrastructure, the servers needed to support the one user from each district that has bought the expensive equipment – even the upgrades to the set top boxes - requires a significant redesign that can't be repurposed. It makes it very expensive."

The next level of content is going to be a hard sell to consumers who are only just converting their media libraries to Blu ray, so Hunt believes online streaming is the answer – it can also solve the 'chicken and egg problem' he describes, whereby cable and satellite broadcasters will be wary of upgrading to this new format without content, and nobody will make it with no easy delivery mechanism.

He also told us that the company was experimenting with the idea of offering tiered pricing to its consumers (which has now been rolled out to new customers), allowing legacy customers to stay on the current price plan while offering things like a 'gold' package for those looking to get the most out Netflix, which could include the 4K package later on:

"The opportunity is there to provide a one stream individual plan, a two stream family plan and a four stream 'gold' plan, where those who want the top tier [just want it all] and are less price sensitive, but we can still offer the individual plan at the lowest price.

"We've been testing this for the past few weeks, the idea of separating the price points and stream numbers. The long term is embracing this, the family with a bunch of users who aren't all in the same house at the same... and it would be nice not to sting the individual user who's only using it for themselves."

But Hunt believes that the very title of UHD is a misnomer for 4K resolution, as it will be far more technologically advanced than just more pixels:

"UHD is really three completely different pieces and 4K is just one of those. It's the pixel count on the screen, but it's like digital cameras, which have increased megapixels beyond the point of useful return.

Beyond 4K there's a point of diminishing returns; we've already taken two bites of the apple, with 720 and 1080, this is just another incremental improvement.

"But the other two pieces are the frame rate, which is about a smooth range of motion, and the high dynamic range (HDR) of colour, which is about the depth of each pixel.

"The question is: can we make each pixel stand for a bigger range of brightness and colours, something that makes the picture look amazing?

"Neither frame rate nor HDR are without controversy, but I'm convinced they are the future, the next generation high quality; so for me at least, UHD is high frame rate, 4K and HDR in the colour, we won't see all of that in 2014. Realistically it's probably 4K in 2014, then the other two in 2015 and 2016."

Pressed on these ideas, Hunt admitted that it would be a hard sell to consumers to just describe the changes the likes of improved frame rate and HDR would bring, but believes it's wholly necessary for the industry to embrace them in order to give UHD TVs the jaw-dropping picture that will make buyers clamour to own one – and producers have to be prepared to shoot scenes now that take advantage.

"You won't want to use HDR to just make things brighter," Hunt explained. "It's got to be that 0.1% of the pixels on screen are brighter if the sun is reflecting on the water. The rest of the picture is unchanged, but the viewer thinks 'Wow, that reflection makes it so much more realistic, it's like you're there, it's almost unreal. But that's the thing, it won't seem unreal at all, it's VERY real. It's hyper-real. I think that will be very compelling; we just need to learn how to use it."

When it comes to the future of TV technology, most viewers' excitement will be predicated on a couple of items: does the idea of a massive step forward in immersive viewing fill you with joy, or does it feel like a step too far?

And the more important factor: to achieve these high quality effects, new TV technology will need to be developed, meaning even those that buy a decent 4K set now probably won't get the benefits Hunt is extolling.

But beyond that, fittingly 2020 could be the year that our vision in front of the TV becomes clearer than ever before, with a level of realism that none of us could have foreseen.

As Hunt states, there are a lot of issues over standards and hardware to overcome before this can be a reality – but if the end result is something that is a bigger leap forward than the move from black and white to colour filming, then TV could be set for another renaissance at a time when many are consigning ourselves to a lifetime of watching content on mobiles and tablets.