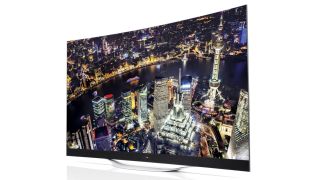 Curved is the new flat

LG is launching mammoth television sets at CES 2014 in Las Vegas, and the 77EC9800 grabs the title of the "world's largest curved TV".

Curved TVs are beginning to break into the market and at 77 inches the LG 77EC9800 is the biggest about, sporting a 4K OLED display for a picture which is four times greater than standard 1080p HD.

With the Tru-Ultra HD Engine the LG 77EC9800 is able to take your normal full HD media and upscale it to 4K, and with support for HDMI 2.0, HDCP 2.2 and HEVC (H.265) codec it can handle the latest technologies.

As well as its curved screen and 4K resolution the 77EC9800 also comes with Cinema 3D, which apparently provides a better 3D experience with controls to fine tune the effect to suit your eyes.

Of course this is a smart TV, with LG's new webOS onboard as the operating system which aims to make navigating round the various features of the TV even easier.

Meanwhile, if you've ever thought "my TV is missing a frame" you're in luck because the LG EA8800, or Gallery OLED TV is here with a 55-inch screen and a "stylish" frame.

As well as the aforementioned frame you also get a 4K resolution, super slim design, smart TV functionality and Cinema 3D technology - all yours for $8999 (around £5500, AU$10,000) from sometime during the first quarter of the year.