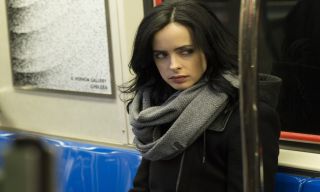 Superheroes, alternative histories, interplanetary wars, bondage: November 20 2015 might well be a date we look back at in the decades ahead and say "this was the moment that streaming grew up".

Netflix's Jessica Jones heads the billing in a day of wonderment, but Amazon Prime's beautifully imagined Man in the High Castle deserves mention for a burgeoning streaming service.

On the movie front, bonkbuster 50 Shades of Grey will hit streaming services like the UK's Now TV and Sky Go, along with Jupiter Ascending – a film that left cinema audiences cold but is likely to find a decent audience (but not critical acclaim) when it arrives for the small screen.

And, in the world of music, Adele's will she/won't she stance on streaming finally looks to have landed on the not option – but even the fact that we're all discussing it speaks volumes for the power of the likes of Spotify, Tidal, YouTube and Apple Music.

The streaming doesn't stop there, of course – services like Twitch will be awash with Star Wars: Battlefront footage as gamers settle down for a long weekend of sofa time with one of the most eagerly awaited games of the year.

It's a perfect storm of big-business media – gaming, movies, TV and music – arriving in a way that would have felt like magic a decade ago.

Netflix started its streaming service – as a side project for a company still sending out DVDs through the post – in 2007, a year which also saw Spotify take its bow and the BBC's iPlayer launch. Marvel's Iron Man came a year later as did Adele's first album, with the Wachowskis working on the awful Speed Racer in this period, while E L James was more concerned with sexy vampire fan-fiction than being a bestselling author.

Streaming is a very modern phenomenon – and yet it has radically changed the very nature of our media.

It has impacted on linear television, on our internet and TV suppliers, on the way in which television and films are made; it's taken a bite out of piracy by providing timely accessible content, and it's allowed millions to listen to songs they haven't heard in years, seen old TV series remade for a new generation, and woken up sleeper hits.

It's given us new and changed terminology – Millennials, 'Netflix and Chill', and Boxsets that scarcely come in a box – and it's put even more pressure on cinemas by giving us instant access to millions of films.

At techradar the water-cooler talk will all be about whether Jessica Jones is as good as Daredevil, whether Adele's album should have streamed, how 50 Shades ever became a thing and how awesome that Vader kill on Hoth was.

So welcome to the day that streaming grew up. It's already changed the world – and this is just the beginning.

Check out our Jessica Jones review