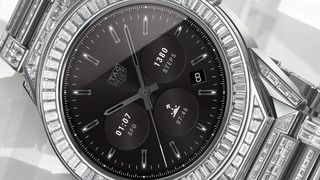 Last year's Tag Heuer Connected Modular 45 was one of the most expensive and premium-looking Android Wear watches we got to try on our wrist, but it turns out that wasn't even the most luxurious version of the watch.

Hot on the heels of the announcement of the Connected Modular 41 comes a 'Full Diamond' version of the 2017's Modular 45. It's polished with white gold, and features an obscene 589 diamonds along its strap and bezel.

Apart from those key differences, it's largely the same device that launched last year with both interchangeable lugs and bands.

We don't know for certain yet – Tag Heuer has yet to confirm the exact spec – but we expect to see the same internals as in the watch that launched last year, meaning a 1.39-inch 400 x 400 display on the front is likely.

We thought the original was fancy

It would also mean it has 512MB of RAM with 4GB of storage on board. There's also GPS, NFC for Android Pay and 50 meters of water resistance if you were ever confident enough to take this watch anywhere near a swimming pool.

And about those diamonds... you'll have 78 VVS baguette diamonds within the bezel itself. There are then 16 more sitting inside the lugs, while the bracelet itself has 495 diamonds – tha's a total of 23.35 carats across the entire watch.

Alongside that, you'll also get a Calibre 5 mechanical watch module that you can connect into the strap instead. It's also adorned with gem stones, but won't run Android Wear.