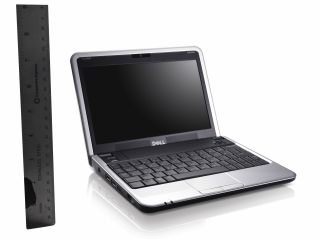 Finally the rumour mill can stop churning, as Dell has officially announced the launch of its entry into the increasingly popular netbook market, the Inspiron Mini 9.

As we notified you in August that the Inspiron Mini 9 houses a 8.9in – quoted as glossy – LED display (1024x600), Intel Graphic Media Accelerator 950 and a webcam. Wi-Fi is also included as is built-in Bluetooth.

Is the price right?

What has been getting people excited is the fact the notebook comes with Ubuntu 8.04. And while this is the case, the Linux version of the Dell won't be shipping for a few weeks. Good news, however, is that it is the cheaper option at £269.

It will cost you £299 for an Inspiron Mini 9 with Windows XP Home, but this netbook is available immediately, available in black only.

Price might be a sticking point for some people when it comes to buying, especially as Dell is looking to take on the likes of the cheaper Asus Eee PC.

When we spoke to Michael Browne, editor of What Laptop, a few weeks ago, he said to us that how much it will cost will determine the Inspiron Mini 9's impact on the market.

"If the Dell Netbook is to be a real Eee PC killer it'll need to do more than just deliver on time – it'll need a great price, which means being under £200," said Browne.

Looking at it, though, the Dell certainly beats Asus in the style stakes.

UPDATE: Dell has revealed, strangely after it released its press release, that its Inspiron Mini 9 will come with built-in 3G, trumping other netbooks on the market. This has just made the laptop a whole lot more appealing.

Dell has also teamed up with Vodafone as well, so you will be able to grab yourself a Mini Inspiron 9 when you sign up to certain Vodafone packages.