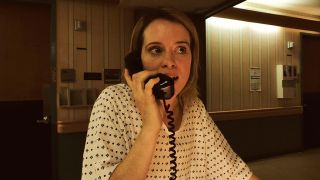 Oscar-winning director Steven Soderbergh is usually known for making slick Hollywood fare like Erin Brockovich and Ocean's Eleven, but for his latest movie, the horror-thriller Unsane, the acclaimed filmmaker has opted to shoot the entire thing using iPhones.

Now, the first official trailer for Unsane has arrived — and it looks just as professional as the director's other recent films, like Side Effects and Haywire.

Having recently come out of retirement with comedic heist film Logan Lucky, Soderbergh's experience making Unsane on iPhones seems to have reinvigorated the director.

Speaking at the Berlin International Film Festival last week for the new film's premiere, as reported by IndieWire, Soderbergh said "I look at this as potentially one of the most liberating experiences that I’ve ever had as a filmmaker, and that I continue having."

“I think this is the future," said Soderbergh about the process. "Anybody going to see this movie who has no idea of the backstory to the production will have no idea this was shot on the phone – that’s not part of the conceit.”

On whether he would continue making future films using smartphones over high-end movie cameras, Soderbergh seemed pretty convinced by the virtues of the former.

“People forget, this is a 4K capture." He continued, “I’ve seen it 40 feet tall. It looks like velvet. This is a game-changer to me.”

It isn't the first important movie to be shot on iPhones, though – the award-winning indie Tangerine made waves in 2015 by being shot entirely on an iPhone 5S. Director Sean Baker's latest film, The Florida Project, which was partially shot using an iPhone 6S, just received a Best Supporting Actor nomination for this year's Oscars.

Unsane stars Claire Foy (The Crown) as a woman who escapes a troubled past only to be involuntarily committed to a mental institution and forced to confront her greatest fear. Has there been a huge mistake, or does she really belong there? Check out the trailer below.