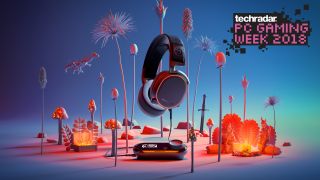 If you don’t know SteelSeries, you’re either not a gamer or you haven’t been paying very close attention. The company is consistently behind some of our top-rated gaming accessories.

The company started out in Denmark with gaming mouse pads, with a glass pad called the Icemat as its first product way back in 2001. That was later followed up by a steel mouse pad that would ultimately lead to the companies name. To this day SteelSeries still makes a great mouse pad.

For PC Gaming Week, we had a chance to head over to the US office of SteelSeries and chat with a few of the company’s key figures. There, we met with Jeff Mahlmeister, the Director of Product and Head of Product Management, as well as Ehtisham Rabbani, the company’s CEO. However, we got a special surprise when one of the founding members of SteelSeries from back in its Icemat days also joined us: Tino Soelberg, the CTO.

We’ve already mentioned that SteelSeries started up in 2001 making mouse pads in Denmark, with the first glass mousepad called the IceMat. In 2004, the company opened an office in Taipei, Taiwan, bringing it close to a lot of the vendors it works with.

For some products, like its cloth mousepads, it had to make them from the ground up, because vendors just weren’t set up to manufacture them to SteelSeries' specifications. In those earlier years, as a small company, it focused on taking what was available and making a product gamers could use.

“That’s a lot of what we did, I would say, very early on,” Soelberg explains, “was taking a lot of the existing technology and then just repurposing it for gaming use.” This could be seen in the SteelSeries creation of the first mechanical gaming keyboard.

From there, the company continued to grow, making a name for itself in the esports space, as it’s products addressed the needs of gamers, and the company went out of its way to help esports players.

Rabbani recalls the company’s relationship with the esports scene in the early 2000s. “SteelSeries was founded to service esports professionals, right? So, back in 2005 when no other company really was looking at esports, SteelSeries was already providing gear to gamers and professional [players]. You know, helping them get to tournaments, because just affording a plane ticket to go to play in a big tournament, for some of these kids, was just too much.”

With roughly 160 people working for SteelSeries between its offices in Copenhagen, Chicago, and Taipei, the company is still small compared to competitors like Logitech. But, what the company is able to make has changed.

“Nowadays it’s a bit different,” Soelbeg tells us. SteelSeries has more financial muscle to take bold steps and design products from the ground up, like it did with the TrueMove sensors and its QS1, Qx1, and Qx2 mechanical switches.

So, with SteelSeries being able to design the products it wants, we wanted to find out more about how it does that, and what goes into making the best products gamers can buy.

Starting from the beginning

Asking how a new SteelSeries product starts out, Mahlmeister explains that there were a few ways the company might get the idea for a new product. One way starts with a simple question, Mahlmeister asks, “What’s the need in the space?” Or, they may look for something they might want to change about a product.

These questions might be answered by looking at gaming trends, what games players are into, suggestions from gamers on staff, or aspects of gaming players are struggling with. SteelSeries did this when they worked on introducing a gaming mouse with 1:1 tracking.

At the time, many mouse makers were focused on putting up big DPI/CPI numbers with their mice. But, SteelSeries got a different idea. Soelberg says, “If you look at the pros, right, it’s all 800, 400, at least the FPS guys.”

And, Jeff Mahlmeister talked about how what they were seeing was more pro players focusing on big arm movements and muscle memory.

So, the company dropped the CPI arms race and went to Pixart, a mouse sensor vendor, to make a custom sensor that would give 1:1 tracking at low latency and a high range of CPI settings.

Later on, they still could see pro players frustration when lifting up and setting down the mouse, as that could create undesired movements. “And that’s where the dual-sensor system in the [Rival] 600 came from,” Mahlmeister tells us.

The other way a product can come about is when a new technology arrives. “We have people in Taipei that are always evaluating like latest technology components,” Mahlmeister says, “so sometimes it’s like the reverse of like – look at this cool technology, we think it could be applicable.”

Once the ideas there, Mahlmeister says his team passes it on to Soelberg’s team. “They would take our gross requirements, if you will, and try to parse through what we’re actually looking for.”

From idea to product

Once the idea is with Soelberg’s team, they being the visual design and quickly move into 3D. Soelberg brings in one designer’s sketchbook for us to see along with a handful of 3D-printed models of gaming mice.

Soelberg explains that beyond these models, the team will sometimes use clay as well, while they’re working out the ergonomics of a product. They’re not afraid to make changes after the fact either, as he says they’ll sometimes take a dremel tool to their 3D-print models to alter aspects of them.

One thing that’s fairly consistent across the SteelSeries brand is a knack for subtlety. This can be attributed to the roots of the company in Danish design. CEO Rabbani explains Danish design to us plainly: “There’s beauty in simplicity.” He believes the designs should be timeless and elegant.

SteelSeries manages that elegance for each product, and even between product lines thanks to its in-house design team.

“We do all of our designs in-house," Soelberg says. "Everything is done by a very small team in Copenhagen, which means that you get consistency, because it’s the same people. They have the same direction … as a team, we’ve worked together for many years, we kind of have the same thinking around design.”

While the team in Copenhagen hands the visual design. The teams in Chicago and Taipei are figuring out the technology. We are shown a large circuit board that had been used to figure out the dual-sensor system that went into the Rival 600. What we saw looked nothing like a mouse, but that experiment eventually led to the best mouse we’ve ever used.

This whole process might take 6 months to end up with a complete design and finished prototype. But that’s not the end. From there, the company still has to figure out how to mass produce it, which can take just as long. And all the while, there’s a chance something might not be quite right.

We were definitely curious about what happens when something goes for SteelSeries. And, the folks we were talking to weren’t shy about failure.

“You need to fail a lot,” Soelberg said.

“We definitely believe that our design is an intrinsic value to the consumer,” Mahlmeister says. “So we are willing to make sure that the end product does match the vision, even if that means development is delayed unfortunately”

He tells us sometimes those delays can extend the timeline to 18 months. He and Soelberg have a good laugh about the delays, seeming to suggest they aren’t all too uncommon. That makes us curious how Rabbani feels about these kinds of setbacks for the company he’s tasked with running.

Surprisingly, he doesn’t sweat it.

“The cost, being short-term minded, that way, to say, ‘look I’ve got a budget that I need to hit this quarter, if I don’t get this product, I’m not going to hit this budget’ – it’s the best way to destroy a brand,” he says of the decision to delay a product. “So, it’s a very easy decision.”

Sometimes a concept may be scrapped entirely. But even that isn’t necessarily the end. Some of the company’s ideas can come back years later. “And then you’ll have Tino [Soelberg] digging up old prototypes,” Mahlmeister teases. “It’s a good thing he saves them all.”

And what happens when the product is done?

SteelSeries doesn’t rest on its laurels. We can see that easily enough when we look at the two best gaming mice on the market, with the Rival 600 rising above everything accomplished with the Sensei 310.

Still, we have to pry a bit. With so many products that seem close to the peak of what they can be, we want to know where the company can go up from here.

“I mean, you’re asking the question that I struggle with everyday, right? That’s what makes our jobs hard,” Mahlmeister answers. Of course, he can’t quite answer with specific examples, as he later makes clear.

“TrueMove 3+ and the Rival 600?" Mahlmeister poises. "We think that’s the best on the market, bar none. How do we beat that? I don’t know – or maybe I know and I’m not telling you.”

Rabbani says with any product, any person, there are going to be pain points. When products launch, they get to see where their peripherals still have pain points. After seeing all the feedback, and maybe having a few drinks, the SteelSeries team can continue working to tackle those for gamers.

For Rabbani, there’s still so much ahead. He uses SteelSeries’ latest headsets as an example: “I personally believe we have the best headset on the market, and honestly we haven’t even gotten started yet.