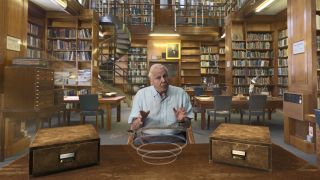 Update: You can now download Hold The World for Google Daydream, Samsung Gear VR, Oculus Rift and Microsoft Windows Mixed Reality headsets. You'll need to be a Sky customer to get access to the app, and you'll be able to get it through Sky's VIP loyalty service. The following interview was originally published in March 2018, but we've updated it for the launch of Hold The World.

Sir David Attenborough is the only person to have won a BAFTA for shows in black and white, color, HD and 3D, and that’s not to mention the honor of a recent 4K award under his belt too. But it doesn’t stop the presenter expanding into further mediums.

Attenborough is now the main event of the new Hold The World VR documentary made by Sky in collaboration with London’s Natural History Museum. The experience allows you to sit down in various private rooms locked away from the public in one of the UK’s best museums, with a virtual David Attenborough sitting in front of you to talk you through a variety of artifacts.

We had the opportunity to sit down with Sir David and chat about the differences of filming in virtual reality compared to his normal nature documentaries.

“It is the viewer – the headset – that’s determining which way it goes,” Attenborough told TechRadar. ”It’s not me, they are making their own program and you are simply program fodder.”

This isn’t the first time Attenborough has featured in a virtual reality experience, but this is the most high-tech (and therefore most intensive filming experience) he’s been a part of so far, which has resulted in the highest quality experience yet.

He said, “The process of capture of the images is so demanding that you have to reduce the amount of possibilities. I can't put my arms out there for example [gesticulates to his side], because it won't take it.

“I must be very careful with my collar for example because when the camera takes it they can take most of it but they can't see inside. If my collar flopped open, there would be a hole in the footage.”

Going off script is also off the cards, too.

“The whole process is so expensive, there's no time to improvise. You can’t say ‘well I think that's alright, I'll go on to chat about something else’ so it's all very, very, very prescribed and I have to behave in a predictable and proper way.

“That’s right and proper so I’m all for it, but it is the utter extreme opposite of what television is otherwise.”

Items featured in Hold The World include a stegosaurus, a blue whale skeleton as well as a variety of flower samples, with each of the exhibits chosen by Attenborough himself.

Professor Paul Barrett, Merit Researcher at the Natural History Museum, was involved in the project too. On the objects chosen for the experience, he said, “We had to say yes or no in terms of fragility and availability of each specimen, and then we discussed the factual accuracy with him for the things he wanted to do.

“There were just a few things that weren’t feasible to do, so we came up with something slightly different. It turned into a genuine collaboration with us pinging ideas backwards and forwards, but most of it was driven by Sir David’s interests and what he thought would be interesting.”

Many of the samples on show are in fact so fragile that they therefore aren’t often removed from storage, making the VR experience able to democratise access that would otherwise be exclusive.

“From our point of view the only difficult part was the fact we were sometimes dealing with specimens that are really fragile,” said Barrett.

“In those cases we were squinting, holding our breath and everything else crossed that nothing goes wrong.

“The stegosaurus looks really good, and one of the nice things about that is although I’ve spent literally weeks and weeks and weeks working with that specimen – I put it up, I wrote about it in a major publication – but this allows for us to see it in different ways that we can’t normally.

Hold The World allows you to spin the virtual items around in front of you as Attenborough talks you through different interesting points. You can zoom in on areas you’re interested in or miss out items you don’t want to learn about.

Unlike your normal nature documentary, in Hold The World you can decide what you want to learn about and skip the elements you’re not interesting.

“It’s a five and a half meter long skeleton,” added Barrett. “So being able to tip it upside down, pull it apart and look at it from a slightly obtuse angle and actually play with it is a genuinely interesting experience. We can’t do this with the real thing – it’s too big, too fragile and other than limbo dancing under it, you just can’t look at it in this way.”

Even Attenborough has favorite items. He said, “The trilobite eye is really a marvellous thing to be able to see. To be able to manipulate it and look at it from whatever angle you wish is an extraordinary experience.

“One of the really enchanting things about it is that enables you to see detail that you couldn't see otherwise.”

To film Hold The World, Attenborough had to travel to Seattle to present in front of one of the most high-tech virtual reality rigs in the world.

“The highlight of it was when we went across to Microsoft - the Holy of Holies - in Seattle actually capturing those images in which 106 cameras recording every hair on your head,” he recalled.

“There’s only one place in the world with 106 angled cameras to produce all the data you need.”

John Cassy works at Factory 42 - the studio Sky worked with to create the Hold The World project. Cassy said, “Everything had to be tested beyond belief so we went out a few weeks before.

“We wanted to test the colors because David often wears blue shirts and we had to make sure that blues worked on screen and the collar lines work, so we took three of David’s shirts in our hand luggage. Dan [a member of the Factory 42 team] had to put one on and pretend to be David under the holographic capture, which is all a bit weird.

“Then poor David had to be kind of always drowned in hairspray on a day-to-day basis because if any hairs went out of line it can be quite difficult to capture that and causes sort of fuzzing.”

It’s all a lot more hard work than your average nature documentary’s piece to camera, but Attenborough is clearly enthused about the new technology and thinks the extra effort is worth it to get such an engaging result.

Attenborough said, “It can be both useful both for the general public and for science. If people made a major new discovery in Australia, they needn’t send the specimen. They can send the file and vice versa: great museums should be in the dialogue with one another showing their objects.

“But I could see it become a part of museums way of allowing people to understand what treasures they have, what they mean, what they imply and what the reality of them is."