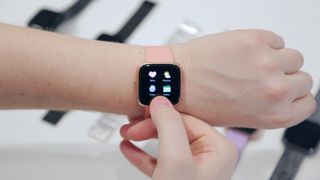 When I started using a Fitbit Versa Lite to track my steps (and, in theory, exercise, if I ever did any), I quickly noticed that the fitness tracker was irritating my skin.

I’ve got a history of skin conditions, with eczema rearing its head from time to time. Before long, a rash started to form on my arm, and after a little while longer using the device my skin started to peel away too.

That’s a grim image, I know, and it was quite an alarming thing to happen on my wrist. Was I just allergic to the silicon Fitbit strap or was I wearing it too loose, causing it to shake and rub?

Was the eczema even involved, even though smartwatches don’t contain anything that usually brings it out for me?

To find out more about how skin conditions could be exacerbated by wearable technology, I spoke to Dr Anjali Mahto of the British Association of Dermatologists.

Mahto has written extensively on the subject of skincare and conditions, and I posed the question of whether smartwatches and fitness trackers should be avoided when you’ve got a skin condition.

“Tight fitting clothing, jewellery or watches would generally not be recommended for people with an inflammatory skin condition as they can cause a flare-up of the condition from rubbing the skin.” Mahto elaborated, and this is probably exactly what caused my initial reaction.

If you’ve not got a skin condition, you’re not in the clear though. “Straps can be a perfect environment for bacteria to grow,” so your skin isn’t exactly going to be clean even if it doesn’t affect you.

Mahto continues, “This bacteria is usually harmless, however if somebody has broken skin due to an inflammatory skin condition there is the risk of infection, although this is not a commonly reported problem.”

What should you do if you react to your fitness tracker or smartwatch? “This is likely a sign that the device is causing issues, and you should consult your GP or dermatologist if you’re worried about a change in your skin.”

How can you use wearable tech if you have a skin condition?

If you’ve got a condition like eczema or psoriasis, but are in love with your smartwatch or fitness tracker, don’t worry - you don’t necessarily have to lose your favorite gadget. Instead, there are some steps you can take to avoid harmful use.

“It’s important to allow your skin to breathe by not wearing [wearables] for long, extended periods of time,'' Mahto told us.

While you might appreciate the waterproof nature, or sleep tracking functions, it might be worth taking your device off in the shower or while you’re taking your post-work nap to let your skin breathe.

In my experience, I found regularly changing which wrist I wore the Fitbit Versa Lite on also gave my skin the time off it needed.

Mahto continued “It would also be recommended to ensure you clean your skin where you’re wearing the device, as well as cleaning the device itself with an anti-bacterial solution.”

If you’re in the market for a smartwatch, and have a skin condition, you should also bear in mind what the wearable is made of. Mahto said, “Contact allergies are very common, particularly nickel allergies. Therefore, devices which contain nickel could lead to skin problems such as itchy rashes.”

I also found that changing the Versa Lite’s band from a silicon one to cotton helped, and there are plenty of Fitbit Versa bands to choose from. There are plenty of different fitness trackers and smartwatches, and bands for them, that by shopping around, you can find one that doesn’t affect your skin.