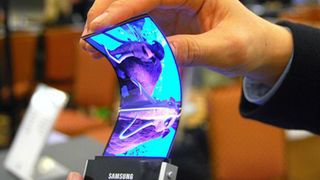 The folding Samsung Galaxy X has been rumored for a number of years, and while it's yet to officially see the light of day the latest rumors suggest it will be shown off to a select few in January 2019 and cost almost $2,000.

Samsung has previously confirmed that it is working on a smartphone that can fold, but has offered no indication of a potential release date or any of the specs.

However, Kim Jang-yeol, head of research at Golden Bridge Investment, says that the Galaxy X will boast a 7.3-inch OLED display which will reduce to 4.5 inches when folded.

Park Hyung-woo, analyst at Shinhan Financial, expects the Galaxy X to enter production around November, with a view to launch towards the start of 2019.

There's a suggestion that Samsung may hold some behind-closed-doors meetings with partners and retailers at the beginning of January during CES 2019, to show off the new foldable handset.

It's likely the device won't be made public until a little later on - potentially at MWC 2019 at the end of February.

While the claims made by the analysts are believable, we've heard so many rumors about the Galaxy X over the years it's always worth taking things with a pinch of salt as firm details are still difficult to come by.

Via PocketNow and SamMobile