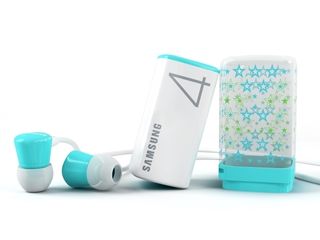 Tic Toc - for the fashion-centric fashionista in your life

Samsung has announced the arrival of the Tic Toc, a fashion-themed MP3 player with motion control, aimed at "young women who want the latest fashion gadgets"

Announced this week, the Tic Toc is a palm-sized MP3 player and will be available in pink, blue, black and – in case you're still not sure who it's aimed at – a Hello Kitty theme.

Samsung really are pushing the Tic Toc at fashion fanatics, with the promise of a 'fashion case' and 'fashion earphones' aimed at "trendy fashion lovers".

Motion control makes a prominent showing on the Tic Toc, with the ability to skip songs by holding the device horizontally and shaking it left or right, volume is changed by holding the player vertically and clicking up or down, and three clicks skips to the next album on your playlist.

The Tic Toc can recognise the speed of tracks and will play either fast or slow songs when asked to, depending on whether you want fast tracks for running or a slower beat for relaxing.

Georgina Franklin, Head of Channel Marketing says, "The Samsung Tic Toc is perfect for young women who want the latest fashion gadgets. With so many features on such a small MP3 player, it really is the latest must have colourful and fun accessory for music fans."

Due to the lack of a display, the Samsung Tic Toc will read out song names – just like the iPod shuffle – using Samsung's Digital Natural Sound Engine.

The Tic Toc has a UK release date of September with a choice of 2GB or 4GB of storage, with prices starting at £39.99.