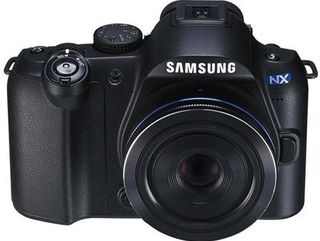 Samsung announced today the arrival of its new NX Series range of cameras. According to the company, the latest range of cams "offers the performance and image quality of a DSLR and the portability and convenience of a compact point-and-shoot."

This is all because the cameras utilise an APS-C sensor system, which means that a high-res sensor can be packed into the body of a much smaller camera.

While this means you don't quite get the imaging quality of something like micro four thirds, the camera could be a good starting point for users looking to step up to prosumer-style photography.

To prove that the sensor tech is tiny, Samsung has made its news NX series not much bigger than a point-and-shoot camera.

Features of the camera include an ultra-precise Electronic Viewfinder (EVF) and Live View functionality. Unfortunately, Samsung are yet to release details regarding megapixel size.

Samsung has however made the bold claim that the "the hybrid digital camera market will be over 20% of the global digital still camera market by 2012."

We should see the NX series in the UK in the second half of the year.