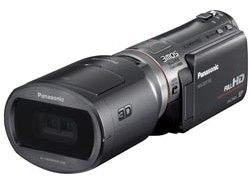 If you fancy your chances as a budding 3D cinematographer, then you might be interested to learn that Panasonic is soon to release a consumer-grade 3D camcorder.

The first details on the new Panasonic HDC-SDT750 have been leaked onto the internet.

Panasonic is expected to make an official announcement about the latest 3D kit at a Tokyo-based press event on 28 July.

For now, we already know that Panny's stereoscopic 3D camcorder - the HDC-SDT750 – is billed as the "world's first 3D Shooting Camcorder."

It also seems that the camcorder is not entirely new, but rather an upgrade of an existing 3MOS model with a "3D conversion lens" attached to it.

According to information leaked via Panasonic's website, the HDC-SDT750 will shoot in 1080p AVCHD at 60fps.

We have reached out to Panasonic UK for further details on the latest 3D camcorder plans, and expect to hear lots more from the Tokyo event on the 28th.