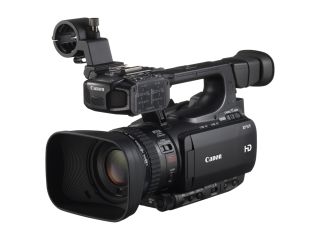 Canon has announced two new additions to its high-end camcorder, with the XF105 and XF100 apparently the smallest models ever to include the broadcast quality MPEG-2 Full HD recording codec.

Canon has designed the two camcorders, which are aimed at the professional and prosumer markets, to offer what it calls highly portable Full HD recording at 50Mbps and 4:2:2.

The two camcorders both take many cues from the XF300-series, but are much more compact and weigh in at around 1KG.

"Weighing just over 1kg , with advanced ergonomics designed to be comfortable for extended shooting, they benefit from a series of features adopted from the XF300-series.

"The much-praised design principles of the existing XF camcorders have also inspired the build of both models, with easy-to-reach, customisable controls, an outstanding LCD and XLR inputs built into the handle."

The cameras will go on show at IBC in Amsterdam and Photkina in Cologne, and have a UK release date of the beginning of 2011, with no UK price yet confirmed (think: not cheap).