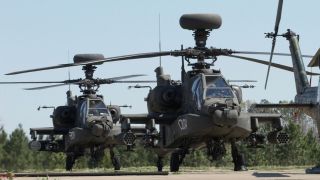 Not to be confused with an actual helicopter

The ZTE Apache could touch down as the first eight-core smartphone next year, if rumours are to be believed.

According to Chinese site China Times, ZTE has teamed up with MediaTek to launch a flagship, octo-core device, currently going by the military name Apache.

On top of that ridiculous processor, the report also suggests the phone will sport a full HD display, snappy 13MP camera and 4G connectivity.

Last week we heard that Samsung was planning on unveiling its own octo-core processor early next year, which could potentially land in its flagship devices later on – Samsung Galaxy S4 or Samsung Galaxy Note 3 anyone?

If this latest report is true, then ZTE is about to steal Samsung's limelight by beating the Korean firm to it with the aforementioned Apache – although China Times is a pretty hit and miss source of hardware rumours and hasn't explicitly stated where it got its Apache-based intel, so we're not holding out a huge amount of hope at the moment.

We'll be keeping an eye out for the ridiculously over-powered handset at CES 2013 and MWC 2013, just in case it makes a sneak appearance.

We're waiting to hear back from ZTE regarding the Apache handset, although the Chinese firm is unlikely to comment on speculation.

From China Times via UnwiredView