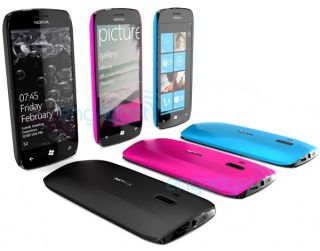 Is Nokia's link up with Microsoft your one to watch?

Voting for the TechRadar Phone Awards 2011 is in full swing, with thousands of you having your say on the mobile phone industry - from phone technology to the best games and apps around at the moment.

But the TechRadar Phone Awards isn't just about looking back over the last year, but also to the future. In particular, the handsets and phone innovations which look likely to shape the rest of 2011 and beyond.

Below, we have a selection of the One To Watch nominations and the reasons why we think these could be potential mobile phone game changers.

We're not just asking for your votes for nothing in return - once you vote, you will have the chance to enter our fantastic competition where 13 smartphones are up for grabs.

4G is the next step in faster mobile broadband and all set to revolutionise the way we browse the web on the go. With 3G occasionally hampered by speed problems and loss of connection, 4G couldn't come soon enough for most mobile phone users.

The promise of faster transfer speeds (potentially between 100Mbps and 1Gbps) and better coverage is making the wait for 4G – which could begin to rollout in 2012 – as excruciating as watching your phone signal go from 3G to Edge.

Although we don't know quite what the number of Google's next phone OS will be, we know its sweet-flavoured name is Ice Cream Sandwich and it's set to be the operating system that connects the search giant's tablet and smartphone offerings.

Pencilled in to come out in late 2011, Ice Cream Sandwich will have a UI similar to Honeycomb, will make your smartphone a USB hub and is said to be Google's most ambitious OS release yet.

It's inevitable that Apple will release its fifth iteration of the iPhone, but what's unknown is just when the iPhone 5 will be released. If history is repeated, then we should see a new iPhone this June but all rumours seem to be pointing to a later, September release.

Regardless of release date, there's huge anticipation for the handset - given that the iPhone 4's antenna problems tarnished Apple's whiter than white reputation.

While BlackBerry was once only for business men looking for a phone which could double up as a computer when on the go, BlackBerry is now going for a more youth orientated market - with a QWERTY keyboard that can withstand even the most addicted of texters and a touchscreen for those who prefer stroking to tapping.

The BlackBerry Torch 2 has a lot resting on its shoulders, with Google's Android OS dominating the phone world and the iPhone getting picked up by more and more businesses.

Rumour has it that the BlackBerry Torch 2 will have a 1.2GHz CPU and BlackBerry OS 6.1 and will be everything the last Torch should have been.

If there was an award for the most amount of hyperbole used in naming products, then HTC would win hands down. It's latest handset, the HTC Sensation is set to become one of the most powerful smartphones around - boasting dual-core functionality, a 4.3-inch display, 1080p video recording and an 8MP sensor.

Perhaps the biggest change is with HTC sense, which has been given an overhaul thanks to the Sensation's dual-core capabilities.

With the launch of the Samsung Galaxy S2 and the Sony Ericsson Xperia arc, there's a number of manufacturers looking to steal HTC's Android crown - but we were utterly impressed in our early look with the Sensation.

An update to Apple's iOS is usually just as welcomed as the arrival of a new piece of hardware - such is the dedication of an apple fanboy.

Apple iOS5 is set to offer a number of new improvements, including better notifications, photo sharing and the promise of cloud music, in the form of a streaming iTunes service.

Couple this with better voice control, gesture control and the arrival of Spaces and iOS5 could be the best operating system upgrade yet.

The Linux project that mixes Intel's Moblin and Nokia's Maemo into a platform designed for mobile devices has been on a long and rocky road to development. But now it looks as if we will finally see it released in smartphone form.

The Nokia N9 is set to be the first handset to have the OS from Nokia which means that despite the mobile company pledging allegiance to Windows Phone, it will continue supporting the open source project.

The arrival of MeeGo 1.2 also proves that development on the platform shows no signs of waning.

The image of the two Steves shaking hands after the announcement of the Nokia and Windows tie-up is a significant one for both companies. Both Ballmer and Elop know that this could be the one chance for them to collectively take on the might of Android and the Apple iPhone.

There's no denying that Nokia is still a heavyweight in the mobile phone market, but it is fast losing traction. Windows Phone 7 is definitely a more desirable phone OS from Microsoft but it hasn't quite had the success Microsoft would have wanted. For these reasons, we will all be watching to see what happens when handsets start to appear in early 2012.