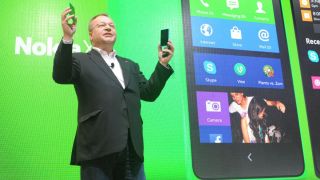 Welcome back! It's been a while – and things are a little different around here. Firstly, 7 days in mobile is dead… long live 7 days in phones. And secondly, well… actually there's nothing else to tell you. That's it.

It's still going to be the same useless frippery about the phone industry this week, your one stop shop to read a pathetic attempt to bring a humorous angle on all things smartphone (with a smattering of smartwatch, tablet and ereader stuff in there too).

That's pretty much it. Please share it with your friends. Or print off a copy for your mum.

It's nearly time for the terror to start

There's nothing else that's more important in the world than the launch of a new smartphone. Nothing. At all.

After all, if there was, why would people get so angry when anyone posts an opinion on any device on YouTube? That must mean it's something very important. Very important indeed.

So imagine the levels of hysteria that are about to be unleashed onto the information superhighway when Mobile World Congress (or MWC to you and me, cheeky phone fans) spews out not one, not two, but thousands* of new phones next week.

If you don't know what the big news is likely to be, following more leaks than a Welsh farm, then, well, you've probably been doing something else other than slavishly following multiple news stories on TechRadar.

Sunday's going to be the big day in the mobile calendar, with HTC launching the new One M9, shortly followed by Samsung's unveiling of the Galaxy S6.

Thanks to the internet's army of leakers, we pretty much know all there is to know about these handsets… I'll let our excellent hubs fill you in on what's going to appear with those massive flagship phones.

But the big news this week from the two headline phones is very simple: HTC's One M9 has been leaked in a lovely long video and Samsung looks likely to have a smaller battery than last year's Galaxy S5.

HTC's forthcoming phone being leaked is almost not worth writing, if it wasn't for being able to point you in the direction of lovely phone info – it's like the brand doesn't care who knows what about its future plans.

That seems like a very, very stupid idea when battery is such a hot space to be brilliant in, but if the rumours that Samsung isn't using the Qualcomm 810 chip are true, then it means it will be doing its own thing on the CPU front and therefore could make things a lot more efficient.

Or the South Korean brand has spent so long on making the thing out of metal that it forgot to put a battery in there, and 2600mAh is the biggest it can manage. One of the two.

Sorted, for E's a whizz

This meant a lanyard attached to a small box, inside of which was a little depiction of the standard press conference shenanigans: a little press desk, a cardboard man presenting the phone, and then right at the back the Moto E itself.

The Moto E is actually a pretty decent phone, although it's no longer the sub £100 offering we loved last year. However, with a stronger processor and qHD screen, it's not a bad phone for the price. High fives for Motorola.

"What happened to him?"

"I… I don't know. I found him under a pile of BlackBerry Storms. I think he was crushed by them."

"Quick… get him into the theatre."

The unicorn's eyes flutter open long enough to see the words 'Mobonia General Hospital' above the door he's thrust through, before passing out again.

"We can rebuild him. He won't be the same again. But we can make him better. Faster. Less obsessed with ancient phones that nobody really gives a toss about."

Tune in next week to read the next exciting instalment, as we discover whether our four-legged hero can ever recover from the crushing pain of the BlackBerry Storm.

While this section was largely added in thanks to coming up with the pun one sunny afternoon in Baker Street, it's always worth revisiting one of the greatest launches to ever emerge from the world of phones.

Take a bow, Asus chaiman Jonney Shih, for winning the award for 'Most committed to the part' in a press conference during the launch of the PadFone in 2012.

Let's all take a moment here to discuss what's possibly happening in this shot. Those fixed smiles seem to be saying 'quick, distract him with the fancy front display on the LG Trax while I call the police.'

Apologies for the dismal quality of this video, but it's from the past. You remember the past, right? That thing that happened before the past but is kind of close to the present?

Also sorry for the loud sting at the start. But it's worth it, promise.

It's Apple o'clock – the Watch is going to be given its own event on 9 March, so perhaps the reviews won't be far away?

There's a secret love story behind the launch of the LG Watch Urbane – and our friends on T3 have uncovered it.

LG has gone a little bit bonkers at MWC – it'll be launching a quartet of phones that are 'selfie stick ready' (urgh) and an LTE version of its Watch Urbane, but one that won't be based on Android Wear, and will have a much bigger battery.

But you can use it was a walkie talkie and make calls with it. That's a win right there.

Come back next week to see whether we made it through the madness… and of course to find out what happened to Winston.