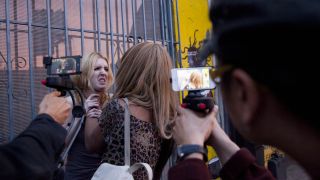 Back in 2007, SMS Sugar Man was the first feature-length film shot on a mobile phone. The handset used was a Sony Ericsson W900i. Since then filmmakers have been pushing the boundaries of phone filmmaking.

The latest movie to do this is Tangerine, an American comedy-drama that had its world premiere at the 2015 Sundance Film Festival and is out in the UK now.

It's already won the Stanley Kubrick award at the Traverse City Film Festival and is up for Best Feature at the Gotham Independent Film Awards 2015.

The film follows two trans woman sex workers on a journey through West Hollywood – and the whole thing was shot on the iPhone 5S. A couple of iPhone 5S' to be precise.

Director and writer of Tangerine, Sean Baker, said "It started as a budgetary thing."

"I couldn't shoot on the higher-end cameras. I was almost stuck with the lower-end cameras like a DSLR, but even that would have added three crew members and we couldn't afford them.

"We began the search for alternatives and one of those was the iPhone."

Baker used an anamorphic adapter for the iPhone lens that allowed the film to be shot in Truescope.

He also used an app called Filmic Pro. "It has all these bells and whistles and it allows you to unlock 24 frames a second, control your exposure, aperture and focus.

"On top of that it has a higher-quality compression rate."

"So those two tools really got us there and then we had a smoothie, that is a little handheld grip, to actually stabilize the iPhone."

Shooting with an iPhone brought about some unexpected bonuses for the filming process as well.

"It's as close to a hidden camera as you can get," said Baker.

"In this kind of film you're blurring the line between documentary and narrative – you're capturing a lot of street life and first-time actors. It's the best device at this time to use for that sort of thing.

"Nobody takes it seriously. There's not this elitist sort of big machine in somebody's face that they've never seen before – this is a phone that everybody owns. The intimidation factor isn't there"

The biggest issue Baker and his crew found was coming to terms with the fact they wouldn't be shooting on real film cameras.

Baker is on his fifth film now and as he said, he's all out of favours in the industry. "It was only an ego thing. It was about accepting the fact that we were shooting on something that could be considered amateur.

"In the end we are creating our own aesthetic, we just had to accept it," he explained.

"I have one producer, her name is Shih-Ching Tsou and she's the one who's always saying 'It's not about the device you capture it on, it's about the content.' She's always pushing ourselves on that so ultimately we had to listen."

Sound is another issue Baker found when using mobile devices. "Audiences can accept different things visually, but they can't accept poor quality when it comes to audio. You need to take your audio very seriously."

Hollywood is going to start accepting these kind of technologies into film making faster and faster. Baker agrees and even pointed out how films such as The Fast and the Furious franchise are using GoPro cameras for certain kinds of shots that others cameras can't get.

"You can shoot 4K on these phones. If you can do that, you're up there with the big boys. Why not?"

Baker added, "If I get a television show I'm going to definitely shoot it on an iPhone."

Tangerine was shot back at the start of 2014, before the release of the iPhone 6.

Some have criticised Tangerine and its crew for not using the best equipment available on the mobile market. When the iPhone 5S was used for Tangerine, the Sony Xperia Z2 was out with a 21.7MP camera on it compared to the iPhone's 8MP. But Baker had to use the tools he had at his disposal - and that tool was an iPhone.

"I did all my tests on the iPhone. We were so ghetto that we couldn't even move ourselves from the stuff that we owned ourselves. We were stuck in that place and we had to make the most of it."

But Baker is jealous he didn't get to use the iPhone 6S when shooting Tangerine.

"I'm jealous of the people that are making stuff today. There would be 4K, stabilisation and all the other bells and whistles. If I was shooting today, I'd be using the highest quality iPhone out there."

Tangerine is out in selected UK cinemas now. You can watch a clip from Tangerine down below.