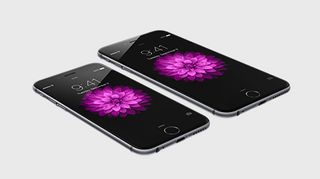 There's a couple of things that I look for in a phone: I like battery life that doesn't leave me scrabbling for a cable 20 minutes into a train journey and that it's just really, really good at everything else.

Not a lot to ask, eh? My current phone - the now venerable and archaic iPhone 6 - ticks at least half of those boxes. And I love it for every one of those 19 minutes in carriage D.

I thought long and hard about whether to go for a 6 or a 6 Plus the last time around - weighing things up literally and figuratively before plumping for the sleeker, lighter and more pocket friendly option.

Frankly, I've regretted it ever since. So this time around I'm going to plump for the Apple iPhone 6S Plus.

Obviously one of the key factors is the battery - even with a bigger screen it's been pretty clear to anyone with an Apple-toting phab-friend that their phone lasts longer with similar use.

That would be less of a big deal with some phones, but with Apple devices the battery is definitely one of the primary causes of complaint. Bendgate might have caught the early headlines, but I've used mine for a year and can still use it as a ruler but still find it infuriating that I have to regularly tinker with the screen brightness to coax my phone through till early afternoon.

I'm not suggesting that the iPhone 6S Plus will be the doyenne of long battery life - it is after all an Apple product - merely that it manages to last longer and continue to do all the things that an iPhone does well.

The other big reason for an update this time around is that I like a proper change, and a new form factor is definitely one way to keep yourself a little bit excited about a change.

Going from a 6 to a 6S would feel a bit like changing your car from a Mini to a slightly faster Mini, it's a bit faster and has a few more bells and whistles but it's not exactly going to brighten your world for long.

Then there's image stabilization - it actually made a big difference in the last generation, and although it doesn't amount to a hill of beans, it is a factor for those of us who have all-but abandoned actual cameras.

I completely understand why people are annoyed that phones are become bigger and more cumbersome, but honestly I've never been especially annoyed by a phone taking up pocket space.

In actual fact, since phones became thinner, having a modern phablet in your jeans is probably more comfortable than one of the old candybar phones.

All this distance into the argument and I've not even mentioned the mammoth in the room, that big glorious screen.

Yep, from my Fallout Shelter addiction right the way through to watching Amazon Prime offline and simply having a more comfortable reading experience, that screen is a step up from what I'm used to.

It's more expensive, of course, but I'm okay with that, because on this occasion bigger is definitely better and I'm prepared to pay the extra to have a little Plus side rather than the iPhone 6S.