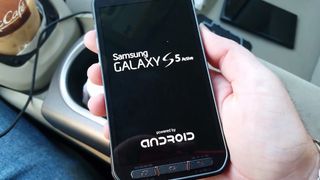 We've been skeptical about the prospect of a Samsung Galaxy S5 Active – the S5 flagship is already waterproof and dustproof – but a couple of new videos have surfaced showing what appears to be that very phone.

The footage was captured by TK Tech News, which showed off the alleged Galaxy S5 Prime just days ago.

The rugged phone in the video shares some design similarities with the Galaxy S4 Active from last year, most notably the extra padding and rear seal to protect the handset from water.

However the Samsung isn't stripping back the specs this time: the leak shows that the same 16MP camera is still onboard, along with the heart rate monitor.

TK reckons the screen is sharper than 1080p but it seems unlikely that Samsung would pack its Active with a better display than the original S5.

It's also tough to tell how close to the final production model this is, but it certainly doesn't look too far from completion.