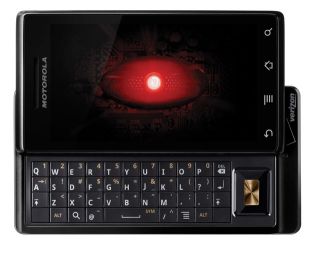 Motorola's UK version of the Droid mobile phone, the Milestone, has finally landed on our shores through online retailer Expansys.

The phone is the first to offer Android 2.0, the latest version of the mobile OS, bringing with it a whole host of upgrades.

Speaking to TechRadar, a spokesperson for Expansys said the site had received 'massive' pre-orders in the two weeks it had been on sale, and confirmed the Milestone will be shipping today.

The Milestone is on sale as both a SIM free unit (£449) or on a contract with T-Mobile (£50 on an 18-month £35 a month deal), but the spokesperson also confirmed to us that this doesn't mean that the network will be running with it in store, just that it is Expansys' 'preferred' network.

The good news for all of those G2 Touch users who were left waiting for the official T-Mobile version of the upgrade is that the contract version of the phone will be offered in its 'natural' Android state - ie with no T-Mobile firmware on board.

The QWERTY keyboarded Milestone, which also brings a large 3.7-inch screen, will be sold through Expansys until 31 December, although we're still waiting to hear word over which networks will be offering it.

Expansys is also offering consumers who trade in an old HTC, Blackberry or iPhone up to a £100 rebate via mail.