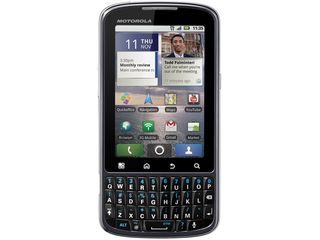 The Motorola Fire will go on sale in late September at the fairly reasonable UK price of around £200, according to one retailer.

We're as confused as you over this whole naming-different-phones-the-same-thing scenario, and we've got a call in to Motorola to ask them to sort it out – or at least clarify what's going on.

Unfortunately, the company is staying tight-lipped as it hasn't officially announced any release dates or pricing for either handset yet, but we're fairly confident that the Motorola Pro will now launch as the Motorola Fire.

So forget the other one for a minute, this Motorola Fire comes with a physical QWERTY keyboard in a power-bar form, with 2.8-inch touchscreen and Android 2.3.

It also offers a 3MP camera, Wi-Fi, Bluetooth, 3G and a 1GHz processor, which is not a bad selection of specs for the money.

Clove, the retailer that unveiled the upcoming release date, doesn't think it will be stocking the full-touch version – that's the Motorola Fire XT531 that was unveiled last week – but it's possible that other UK retailers will.