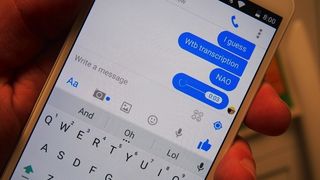 Facebook is testing a new feature for its Messenger app that will let you turn sound clips into text messages.

The new feature will let you send voice messages to your contacts in Messenger, with the transcribed text displayed below.

According to David Marcus, Vice President of Messaging Products at Facebook, the new feature will be rolled out to a select few users for testing and if successful will be made available for all Facebook Messenger users.

Dictated, but not read

"Our plan is to test this feature at a tiny scale for now and we're looking forward to seeing what you think of it before making the experience more widely available."

Although being able to send sound clips via Facebook Messenger has been a feature for some time, automatic transcribing could prove to be an exciting addition. Its productivity potential could also help with Facebook's ambitions to be used professionally by people at work.